The United Nations Climate Change Conference (COP27) concluded at 09:00 local time with a breakthrough agreement to provide “loss and damage” funding for vulnerable countries hit hard by climate disasters, along with a package of decisions.

The LGMA COP27 Closing Statement was delivered by Vincent Chauvet, Mayor of Autun, France and member of the COP27 Delegation of the European Committee of the Regions (watch the webcast starting at 04:45:20 onwards).

The LGMA warmly welcomes that financing loss-and-damage is finally being addressed in the UNFCCC process. We are particularly proud that the political, technical and financial leadership of subnational governments led by Scotland and Wallonia since COP26 played an instrumental role in breaking the taboos on Loss-and-damage. Towards COP28 in Dubai in December 2023, the Global Stocktake will be one of the major mechanisms of the climate community.

Sharm el Sheikh, Egypt, 18 November, 2022. COP27 has shown that when cities, states, regions and nations work together, greater ambition and rapid action is within reach. Thus, we invite the whole UNFCCC community to join forces with the LGMA Constituency so that multilevel action becomes the beacon-of-hope for full delivery of the Paris Agreement in its 2nd phase.

Our constituency endorsed that Multilevel Action Delivers. This has been the potent motto repeated throughout the multiple sessions at the LGMA pavilion and at the sessions where Local and Regional Governments were welcome. This is the first COP returning to Africa and the global south after COP22 in Marrakech in 2016. Our constituency has set the focus on raising the voices of cities and territories of the most rapidly urbanising continent in the world. In the words of Debra Roberts Co-chair of IPCC, Working Group II “African growing urban areas face climate change impacts on increasing proportions, but also provide an opportunity for rapid and transformative action”. In this regard, ICLEI Africa and UCLG Africa have joined in realising the Urban Africa in Action sessions where local leaders, technical experts and innovators from across the continent exchanged ideas and solutions. These sessions were held both in the Multilevel Action Pavilion and in a special dedicated UCLG Africa- ICLEI Africa pavilion. 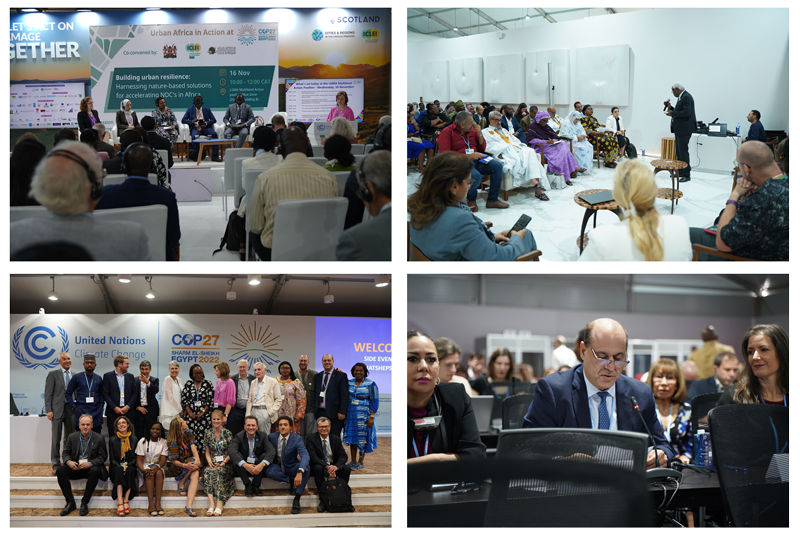 "There is clearly a breakdown in trust between North and South, and between developed and emerging economies." The reflection made by Antonio Guterres, Secretary General of the UN, regarding the negotiations between parties could also be extended to a continuing breach of trust between national and subnational governments. Parties must Listen to Cities, and include the clear links between urbanisation and climate change in the negotiations. Failure could mean that the vision for “multilevel and cooperative action” included in the Glasgow Climate Pact would stray off from being a subject of interest at future COPs.

Nevertheless, the organised constituency of local and regional governments participated in a landmark gathering. For the first time in the history of the UNFCCC COP, the COP27 Egyptian Presidency, supported by UN-HABITAT, convened a Ministerial Meeting on Urbanisation and Climate Change. In a space that will likely remain in COP as a dialogue from the local level to the Parties, cities and regions have been recognised as the ultimate connectors. As pleaded by Libby Schaaf, Mayor of the City of Oakland: “Through the LGMA we are fully committed to take the actions needed to implement the Paris Agreement. We respectfully ask to formalise our role in climate action and institutionalise this Ministerial Dialogue.” 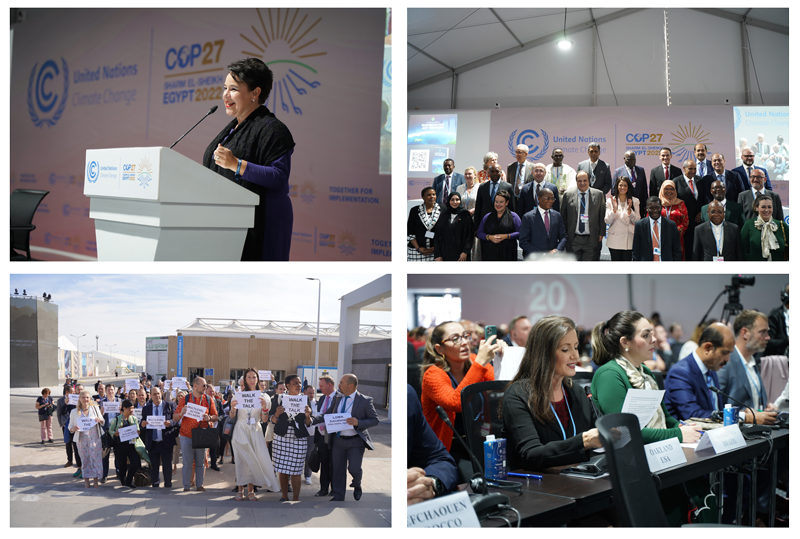 Cities and regions are the first responders to the climate crisis, but cities and regions cannot do it alone. As Mr Mohamed Sefiani, Mayor of Chefchaouen, ICLEI COP27 Special Envoy for Africa and UCLG Special Envoy for Food Systems, has stated “Local and Regional governments need structural support from international organisations and national governments as well as access to direct finance to ensure sustainable urbanisation as stated at Art.6.8 of the Paris Agreement”.

Parties have agreed to report yearly on how they will achieve the Paris Agreement, in doing so, the our organised constituency also recalled the need and urgency to include local and regional governments into the planning and reporting processes of Nationally Determined Contributions, and in National Adaptation Plans. As Ms Sharon Dijksma Mayor of Utrecht and ICLEI/LGMA Special Envoy for COP27 stated, “Cities should be included in NDCs, and Countries should be obliged to cooperate with cities in the climate transition.”

With an overnight U-turn by the EU on Loss and Damage finance, a sliver of hope appears as a financing mechanism for the most vulnerable in exchange for widening the donor base and furthering ambition in cutting down on all fuels consumption –not only coal as appearing in the Glasgow Climate Pact. Still, much doubt is placed on whether these funds will ever reach Local and Regional Governments, as currently only 10% of climate finance transparently reaches the local level.

In the face of increasing urbanisation under a climate emergency, local and regional governments call on national governments and the UN system to include, fund and partner with local governments as the only way forward to keep 1.5º alive and ensure a prosper and equitable future leaving no-one behind.

Yunus Arikan, Director of Global Advocacy at ICLEI, Focal Point of the LGMA

As our sights turn to picking up the shortcomings from Sharm El Sheikh on the road to COP28, our constituency has a key opportunity to build on this next phase of the Paris Agreement and usher in its necessary “emergency mode”.

The Global Stocktake is underway. With recognition by the UNFCCC in Bonn in June that this exercise can be driven by local-level inputs, the LGMA will engage nations over the coming months to host local dialogues in collaboration with their local and regional governments. Under the banner of #Stocktake4ClimateEmergency and inspired by 2018’s precedent-setting Talanoa Dialogues, the Global Taskforce invites hundreds of cities to host their local stocktake contribution.

ICLEI has created guiding materials to support this process in its focal point role to the LGMA and will be collating inputs. Together, we can mobilise voices of cities and regions to answer the questions: where are we on securing a resilient, 1.5-degree future? Where do we want to go? And how do we get there in a just, equitable way? (Both locally and nationally.)

We in Africa have been referring to COP27  as the African COP. This COP focusses on implementation and moving from commitments to action. The recent IPCC report and call for urgent action puts us face to face with our responsibilities, and it is absolutely necessary for the world to realise we must change course so that humanity can continue to live on this planet.

Justice is in the centre of discussions because Africa is one of the regions of the world that has suffered the most losses and damages from the effects of climate change while being the lowest emitters. The world has to do justice to Africa, also because our continent is the second carbon sinker in the world, with the Congo basin forest, and contributes to keeping global warming in acceptable margins so far. While we are grateful for the organisation of the first Ministerial Meeting on Urbanisation and Climate Change, we also call for the official inclusion of a Forum of Cities and Territories as a recurring mechanism for dialogue with leaders and officials of subnational and local governments at every COP.

We always say that the matrix of our Continent has one of its sources here in Egypt. We therefore consider that Egypt has a particular responsibility of building a new narrative of Africa, and COP 27 is precisely a pivotal point on which our constituency hopes that this new narrative will be one that highlights the resolve of the continent to follow from now on a low carbon and more sustainable and inclusive development path.

As Secretary General of the Asia-Pacific Section of UCLG, I was invited to join the session on the Pact of the Future. The Pact for the Future of Humanity, adopted by all UCLG members in Daejeon, builds on the notion that local and regional governments have a critical role as political actors, whose main objective is to safeguard the dreams and aspirations of the communities they represent.

Through this Pact, our local and regional leaders call on the need to completely transform our collective relationship with nature, and for local and regional governments to spearhead the development of a new vision for our common future where we re-analyse the values that shape our understanding as beings and development pathways are nature-positive and seriously address transactional inequalities.

The energy crisis and the geopolitical situation must not hinder the much-needed increase of global ambition. Our local leaders have the strength and the capacity to address this climate crisis. In that sense, there is an urgent need to capitalise on local leadership.

Clifford Galea, Member of the CCRE CEMR Young elected Official Committee and President of Reġjun Tramuntana, and Marianne Overton and Elected Councillor on Lincolnshire County Council and North Kesteven District Council, Spokesperson for the Environment for CEMR participated in several session during the COP27, highlighting the urgent need of having local leaders voices heard, as well the necessity of financing local climate action.

As the implementation of the Paris Agreement is lagging behind, it’s crucial to act now to achieve the goals at all levels of government: mitigation, adaptation, energy transition and safeguarding biodiversity. To do this, we need adequate resources, a supportive regulatory and governance framework, localisation and territorialisation of sustainable development goals, decentralised cooperation and exchange of experience between municipalities and regions around the world. This is a global challenge that can best be met if we all act locally and in an accountable, inclusive, fair, equitable and partnered manner.