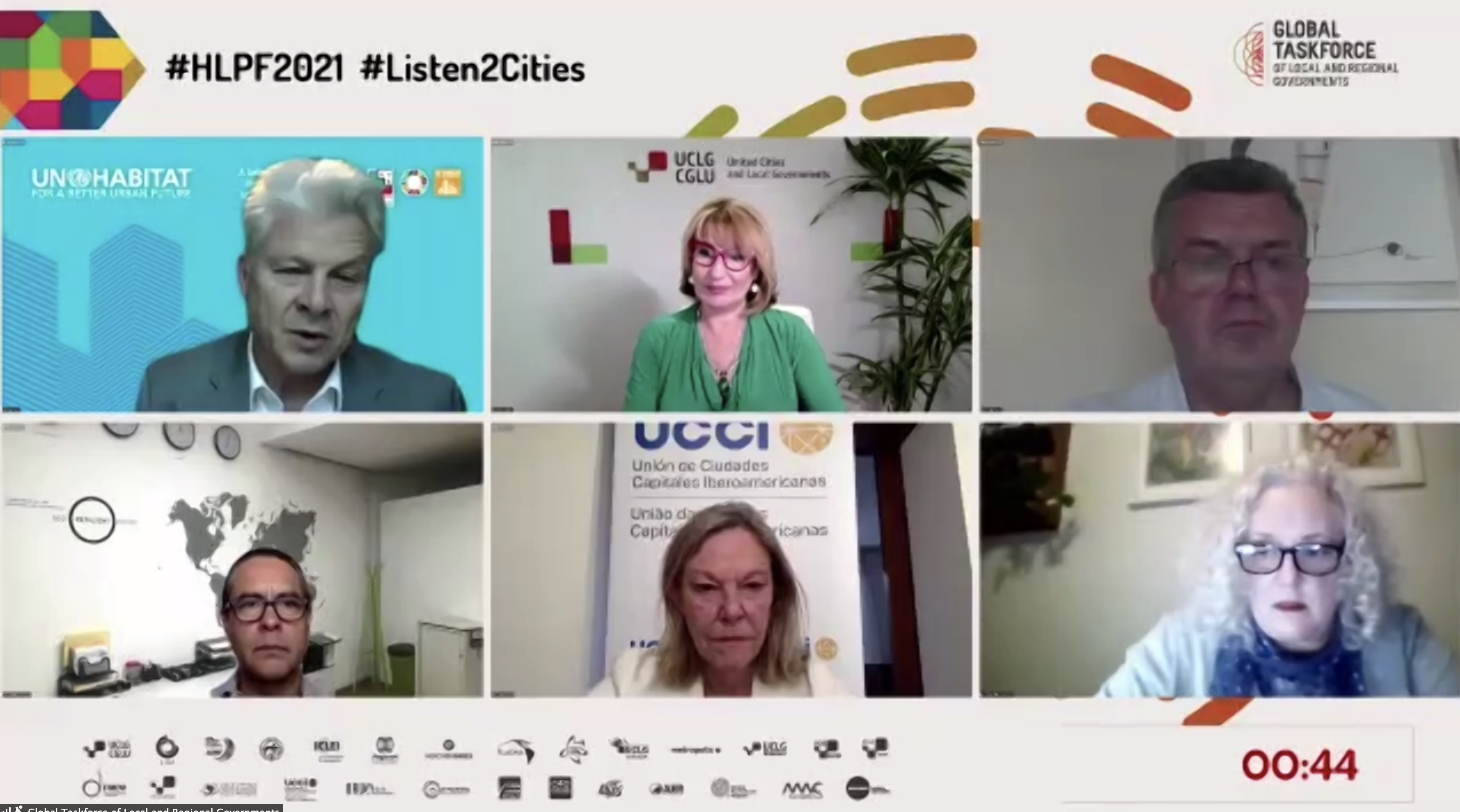 With over 70 elected local and regional officials, and over 200 delegates, the mobilization of local and regional governments for this HLPF is as important as ever, especially in such a complex context. Secretary General of UCLG Emilia Saiz introduced the meeting of the Global Taskforce by addressing this important mobilization, and argued that, in spite of difficulties for our constituency to have nominations accepted at the HLPF, spaces were being conquered, in particular the 4th Local and Regional Governments Forum, a two-day special session in this year’s HLPF, which reiterates our commitment with the localization of the SDGs.

It will be important, she argued, to convene the World Assembly, in close collaboration with UN-Habitat, also considering the UN Task Force for the Future of Cities, as a means to ensure that the New Urban Agenda is truly seen as an accelerator of the 2030 Agenda, which is itself an imperative for local service provision. 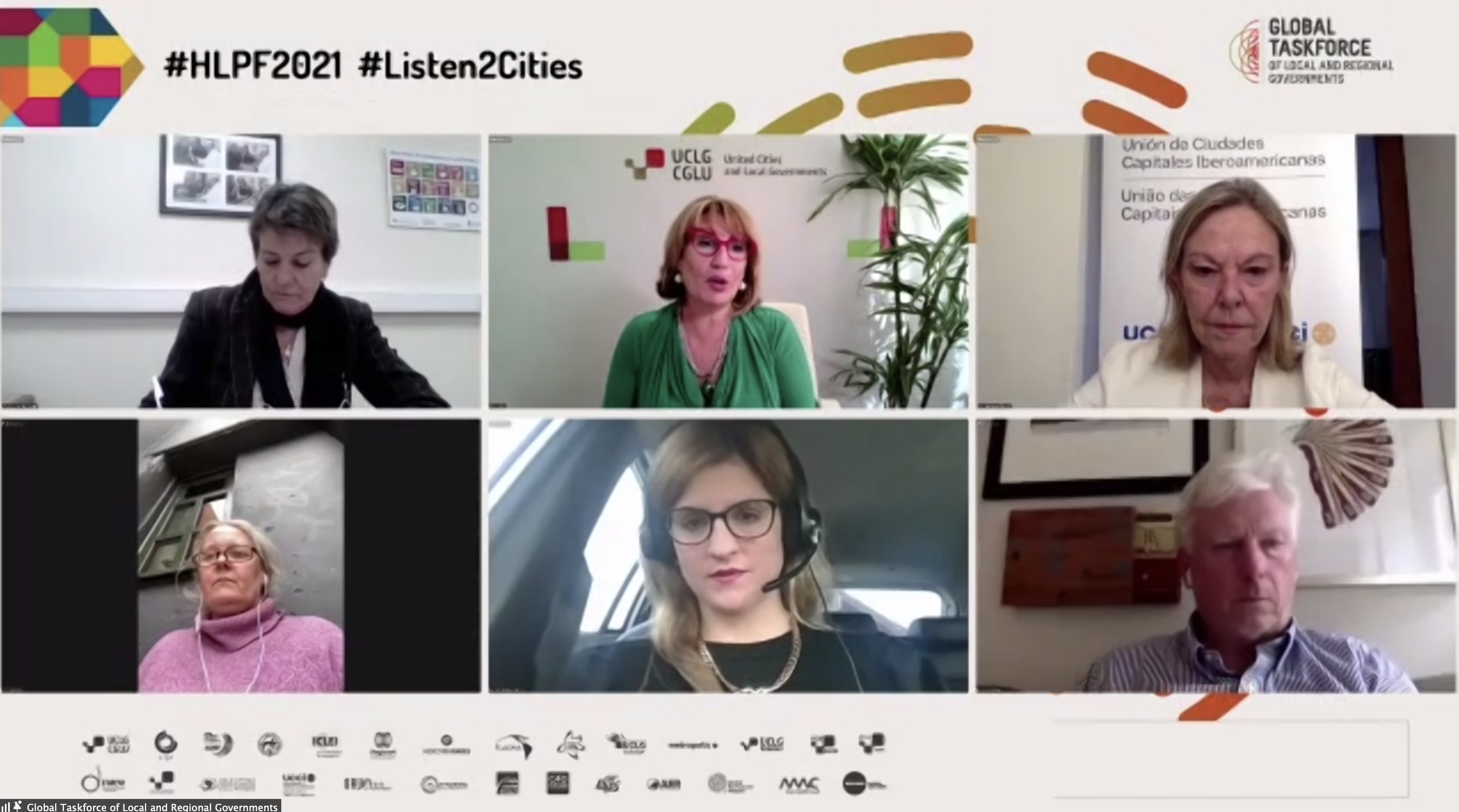 Rafael Tuts, Director of Global Solutions Division, UN-Habitat, underscored that one of the key elements of NUA is the capacity for LRGs to play a role in the process and in this regard underlined that there is an opportunity to look at UNACLA as a vehicle for consultation on local and regional government issues. He also mentioned that  reporting needs to be included in the SG Report for 2022 and as of today, submissions by Member-States is limited, with only a dozen submissions. The platform for reporting will work as a peer review mechanism and LRGs will be crucial to it.

Genie Birch, President of the General Assembly of Partners, made a plea for the importance of multilevel governance in the implementation of the SDGs, and particularly SDG 11, and the NUA as a roadmap for implementation for all goals. GAP is assessing the progress of NUA and SDG 11 through a survey to understand and collect information on the initiatives of governments at all levels and all stakeholders around these two global agreements. Ms. Birch then reiterated GAP’s availability in partnering with the GTF to ensure the NUA becomes a reality.

Kobie Brand, Deputy Secretary General, ICLEI, recommended that the GTF recognizes what is being carried out in the biodiversity file and in the implementation of the post-2020 biodiversity frameworks with successful mobilization of networks, including Regions4, ICLEI and COR. The Edinburgh Declaration process will be followed by an Action Plan referenced by the CBD. Negotiations within the UN CBD post-2020 process has been a game changer with regard to recognition given to the role and contributions of local and subnational governments in the implementation of the post-2020 global biodiversity framework. This has been as a result of the mobilisation of local and subnational governments through the Edinburgh Process.

Lucy Slack, Acting Secretary-General, CLGF, commented on the Technical Roadmap towards Quito+5 with two main issues: recognising the leadership roles of cities and city leaders/mayors in the process that is both technical and political, and second the contextualization of Covid and the key role for local and regional governments to rebuilding social fabric and not increase divisions between haves and haves not.

David Miller, Head of international diplomacy, C40, supported the advocacy efforts of LRGs at UN processes and the importance to build on the leadership of local and regional governments to fight climate change and build more inclusive and resilient cities. He also referred to the need to strengthen climate action as a key pillar to accelerate efforts on all agendas. He mentioned the important to look at different ways to engage with the UN: including city programs on financing, as actors of the Paris Agreement, on through cities role for the institutionalization of GCoM and the Race to Zero

Frederic Vallier, Secretary General CEMR, emphasised the need to develop policies to be able to tackle new developments and challenges in our cities. He advocated for the need to rethink  the debate with the states and the UN and how the 2030 global agenda can respond to new challenges.

Fabiana Goyeneche, Director of International Relations and Cooperation of Montevideo & Mercociudades, underlined the importance that Mercociudades gives to consider the current context within the NUA monitoring preparations. From Latin America, she argued, the “4C approach (4 “Cs”, in the original Spanish) to transformation includes: Connectivity and digital democracy, Social Cohesion, Care and Home. The proposal would be to have a participatory process that would enable surveys, interviews and working groups from the GTF towards Quito+5. 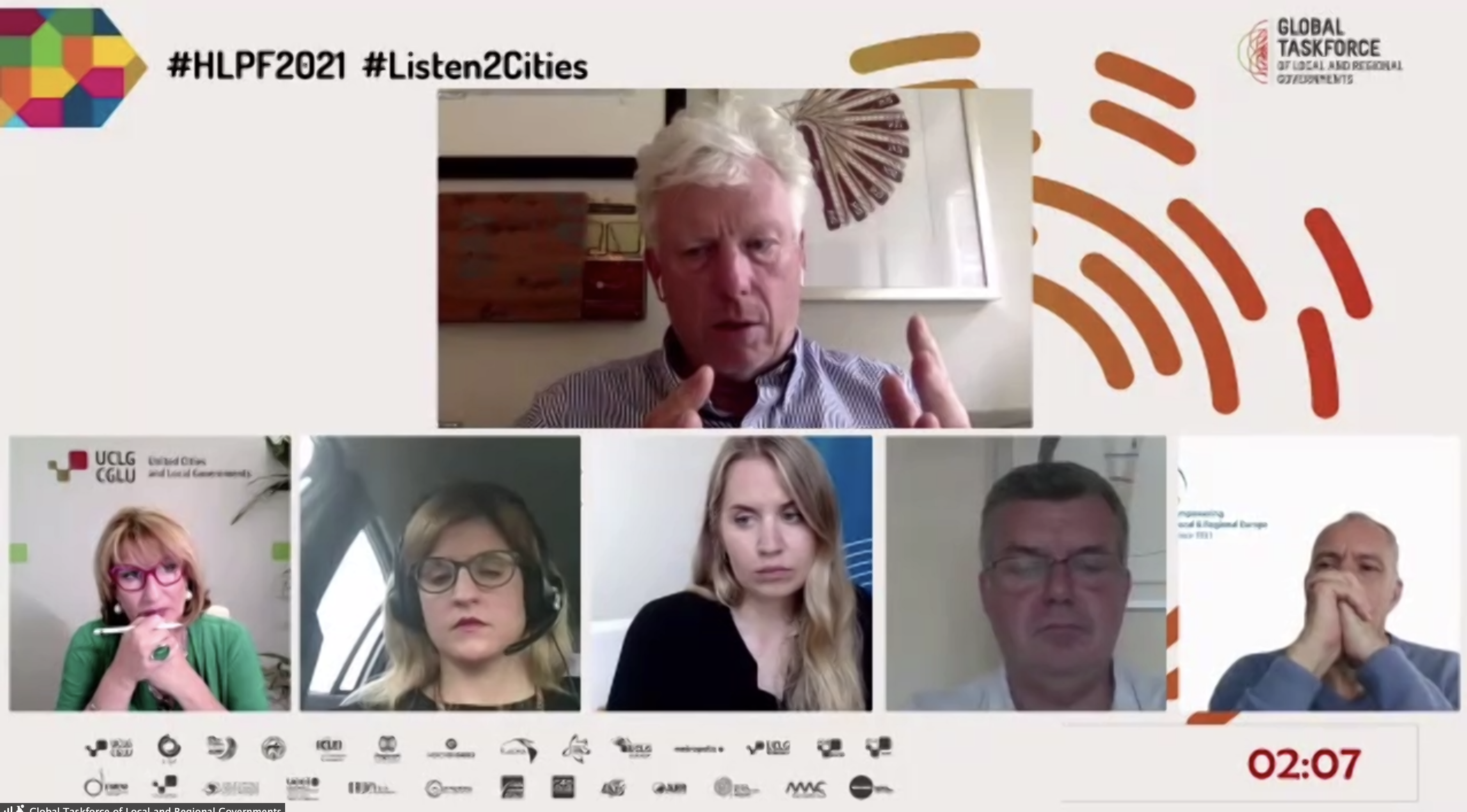 Vittoria Zanuso, Executive Director MMC, commended the statement to the HLPF and thanked them for acknowledging the migration elements. She called for stronger work with UCLG and all the other networks of the GTF for sustainable financing.  She mentioned the Global Cities Fund for the pandemic response including inclusive climate action and offered the support to enhance climate opportunities linkages with migration.

Emilie Maehara, Deputy Director, FMDV, stressed as well that financing needs to be a priority of the World Assembly, a pre-condition for the LRGs to implement global agendas. She referred to the systemic failure of municipal market and the lack of capacities to establish bankable projects.

Elisabeth Sardà, Territorial Policies at the Regional Government of Catalonia, mentioned the need to link recovery and urban agendas as a guarantee to advance on environmental sustainability and social cohesion.

The session then continued and presented the priorities of the local and regional government constituency presented in the Local Authorities Major Group Sectoral Position paper and addressed the need to empower all spheres of government for a more inclusive multilateral system.

The Secretary General of the Assembly of European Regions, Christian Spahr, opened this segment of the meeting by stating the importance of creating social cohesion, and not just traditional management issues for regional governments. He mentioned the importance of reconciling all areas in management of crisis beyond short-term remedies. He also made a plea for a stronger dialogue with citizens through new forms of feedback mechanisms. 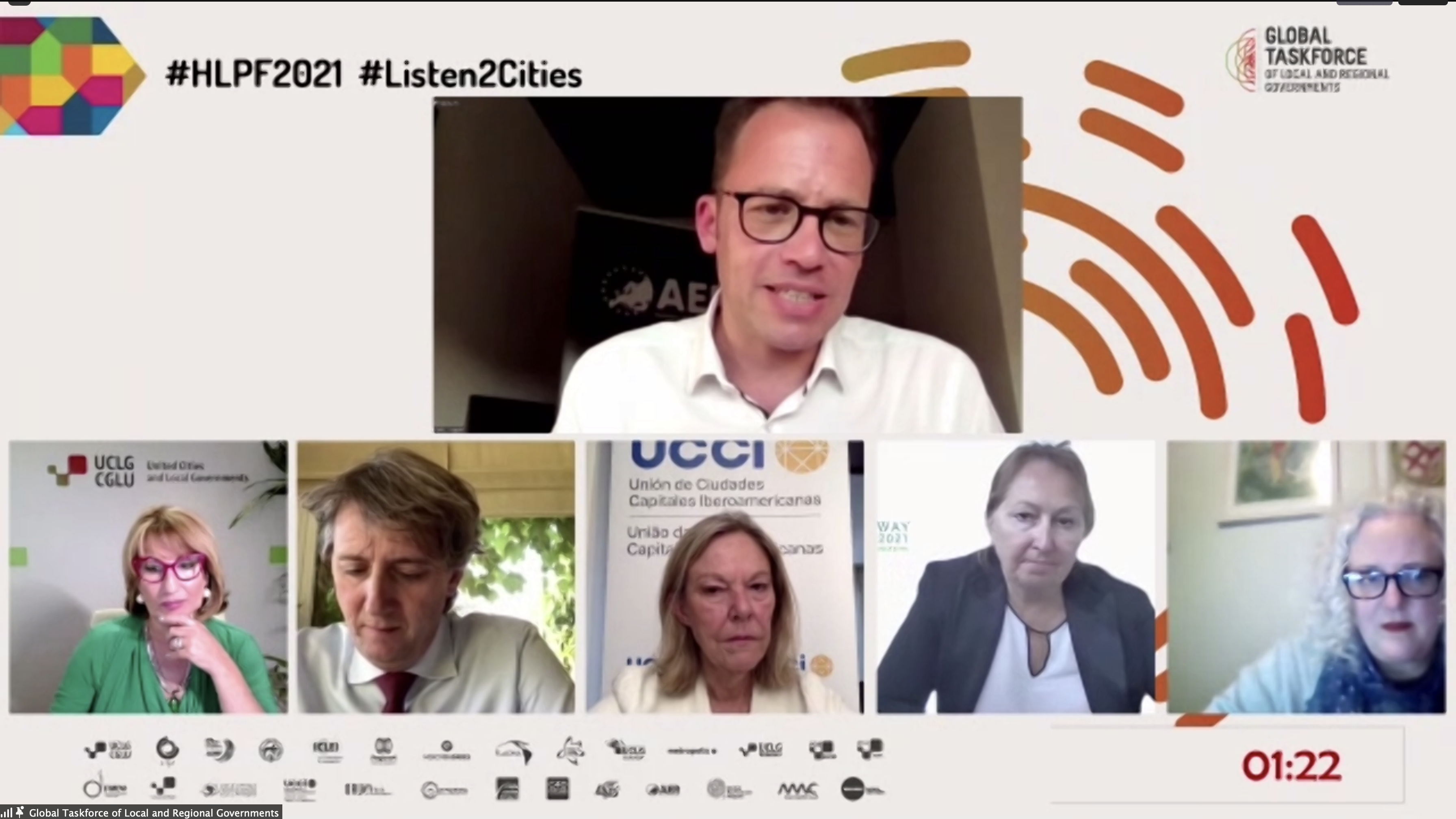 Gunn Marit Helgesen, Member of the County Council of Telemark og Vestfold in Norway, first deputy President of KS and CEMR Co-President, reminded the networks that the crisis revealed that public services are vulnerable and that adequate governance is highly needed. The association is an important coordinator on the relation between local and regional government and national government through the principle of subsidiarity. She referred to the CEMR support to innovative procurement for environmental and climate policies, and the promotion of circular economy.

Carlos Martínez Mínguez, Mayor of Soria, and envoy of the UCLG Presidency for the New Urban Agenda emphasized the need to build a joint strategy with civil society for stronger local public services, including social protection and culture. Development should not be only around economic development but real development above all. This is why, he argued, the New Urban Agenda is a perfect tool to build more attractive and more inclusive territories. He went on to address the  need to continue pushing for an adequate participation of local and regional governments at the Global Table.

Raffaele Cattaneo, Minister of Environment and Climate of Lombardy, underscored the two common targets: ensuring that the 2030 agenda on sustainable development becomes a reality, and supporting the Covid-19 recovery. He also referred to the extraordinary wave of solidarity and ability to cooperate from local and regional levels in facing the Covid19 pandemic through a subsidiarity approach. 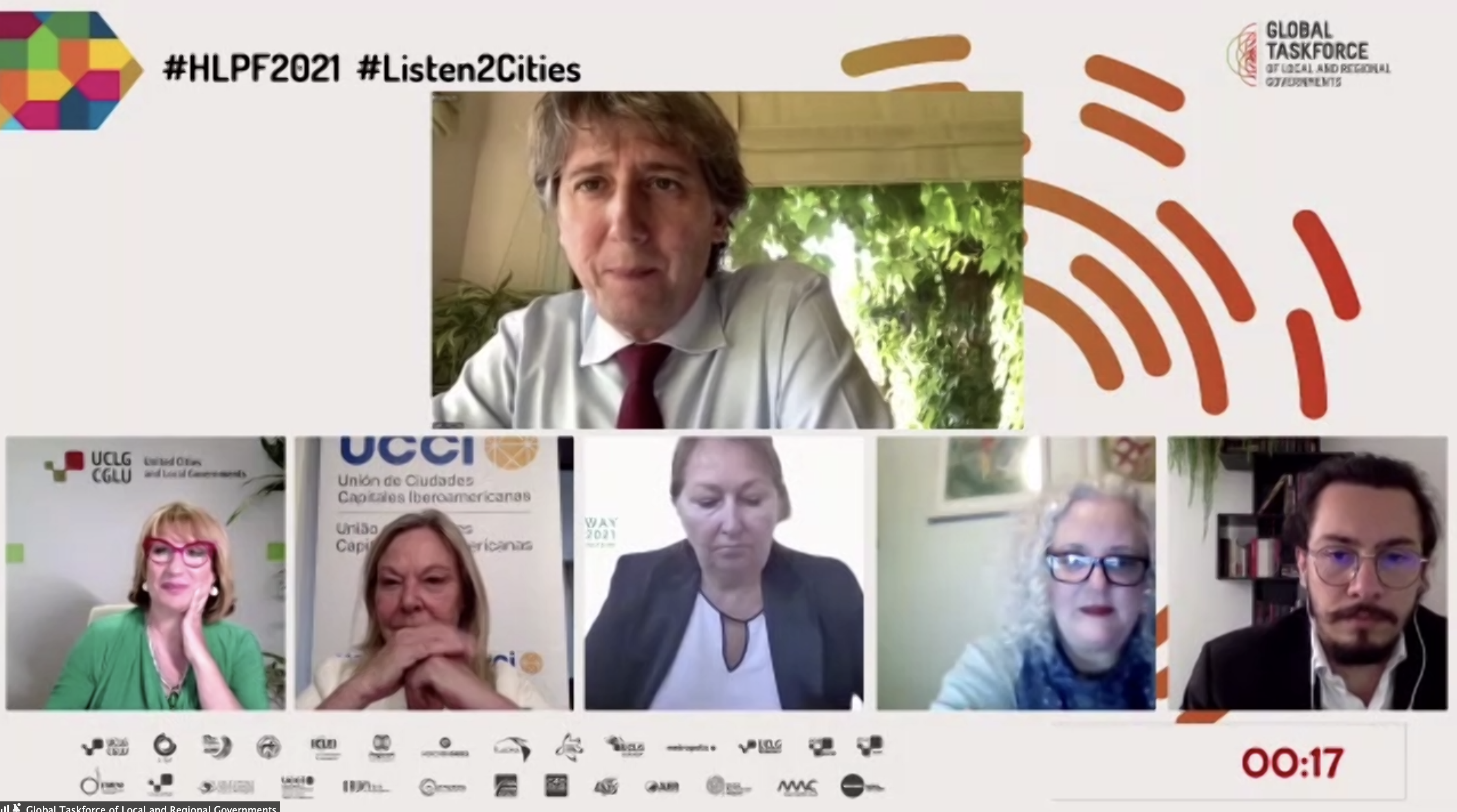 Ana Román, secretary General of UCCI, highlighted the need for joint alliances for sustainable development, and the importance to rethink models for the future, not only for local development but also in terms of collaboration and partnerships between private sector, public sector, academia and civil society.

Marcela Petrantonio, Mercociudades y Tandil, reiterated the significance of the NUA and 2030 Agenda in the context of the health crisis and that it goes beyond the economic perspective. She referred to the need for our constituency to refer to the right to the city, to housing and to digital rights. It will be important to tackle social cohesion, resilient territories and climate change effects and work on renewable energies.

Hugo Salomão, Director of International Relations, Belo Horizonte, reiterated that alliances like our networks play a fundamental role to strengthen cities that can be sometimes isolated. The solidarity of local and regional governments through their networks in the pandemic has been critical.

Kobie Brand, Deputy Secretary General, ICLEI, added another issue related to the SDGs: over 150 activities on localization have been done but more need to be encouraged at UN level and proposed to work on both sides: communicate better to our parties so that they understand better what we do; communicate with municipalities and cities on existing aligning efforts to be aligned with the SDGs.

Gunn Marit Helgesen, Member of the County Council of Telemark og Vestfold in Norway, first deputy President of KS and CEMR Co-President, underlined that achieving the SDGs is a shared responsibility of all levels of government, trust is the most important capital of democracy and that we need to translate and get citizens onboard to make them understand the difficult priorities. 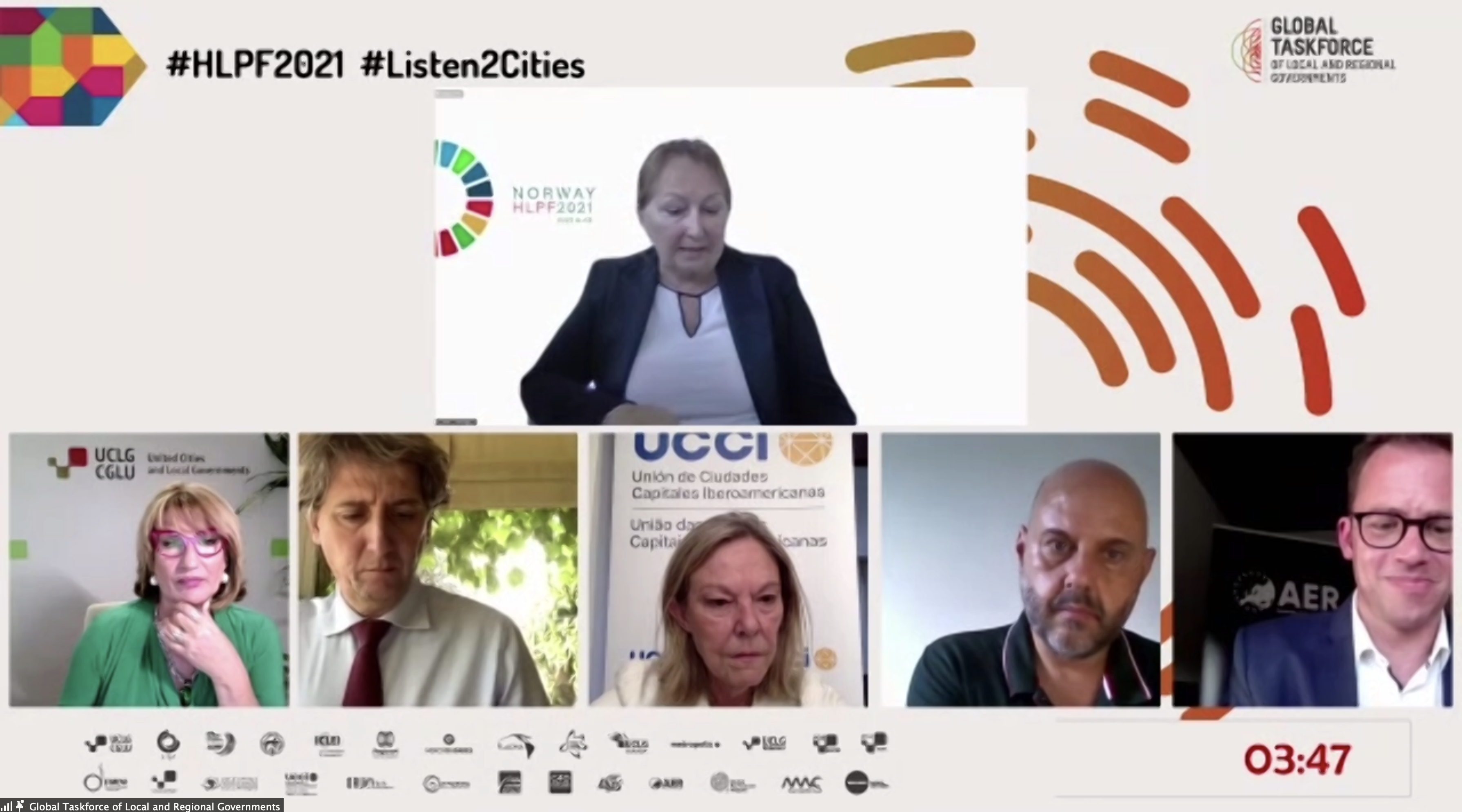 Christian Spahr, Secretary General of AER, referred to the re-centralization trends observed in the past months. In the next moments of crisis, he called for a stronger alignment of local and regional levels, and reiterated the commitment of the European Union.

The session concluded by reiterating the commitments of the constituency and how crucial LRGs are in ensuring the 2030 Agenda becomes a reality. The crises stemming from the COVID-19 pandemic brought to light the vital role local public service provision plays in ensuring that people and the planet are protected and the constituency emphasized that the achievement of the 2030 Agenda depends on the achievement of the New Urban Agenda.