In the framework of the 61st UN Commission on the Status of Women, networks of the global taskforce have mobilized delegations of women mayors and councilors in New York to highlight the role of locally elected women in the achievement of the Paris Climate Agenda and the SDGs.

Locally elected women and the 2030 Agenda

On Monday 13 March, UCLG and UN Women co-organized the special event “Locally elected women: making the SDGs happen” to highlight the relationship between gender equality and local and regional leaders. The special event was opened by Mayor of Bangangté and President of the African Network of Locally Elected Women (REFELA), Celestine Ketcha Courtes, who highlighted that gender equality is a question of social justice.The session saw locally elected women present the ‘Be Counted’ campaign for the development of data to support SDG indicator 5.5.1., to which CLGF has pledged its support. The mayors and councilors highlighted that monitoring the proportion of local council seats held by women across the world should be a priority for the international community.

A number of UN officials addressed the event, including Under Secretary General of the United Nations for communication and public information, Cristina Gallach, Special Adviser for Implementation of the Sustainable Development Goals, Dessima Williams, Deputy Director General of UN Habitat, Aida Kirabo Kacyira, and Director of the Office for ECOSOC Support and Coordination, Department of Economic and Social Affairs, Navid Hanif, reflecting the progress made in the partnership with important UN agencies during the SDG and Habitat III proceses.

Also on the 13th, UCLG and REFELA co-organized a CSW side-event on Women for sustainable development in Africa. This session provided the opportunity for women mayors from Africa and Asia to share their experiences of implementing the SDGs at local level with representatives of civil society. 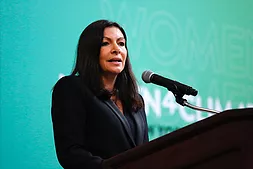 The 15th of March saw the ‘Women 4 Climate’ conference at Colombia University, where the mayors of Paris, Mexico City, Durban, Cape Town and Caracas, pledged to support and mobilize the next generation of women leaders fighting climate change.

The event officially launched the C40-led Women4Climate initiative, which will contribute to the emergence of the next generation of climate leaders by sharing knowledge and experiences through a global mentorship program dedicated to women in C40 cities. It will also highlight the key role women play in the development and championing of climate policies through research and an annual challenge dedicated to awarding women researchers and entrepreneurs on the best innovations in climate and sustainability.

“As women, we know all too well that the powerful often seek to silence our voices when we speak out to protect the most vulnerable in our communities,” said C40 Chair, UCLG Co-President and Mayor of Paris, Anne Hidalgo. “We are here today to show that we refuse to be silenced. All around the world, in city halls, corporate boardrooms and on the streets of our cities women are demanding action to protect the planet from the threat of climate change.”

On the 15th of March, the newly installed Secretary General of the United Nations, António Guterresinvited women mayors and councilors from the UCLG Women delegation to meet in his office to discuss the role of local and regional governments in the achievement of the SDGs and the relationship of international networks of local and regional governments with the UN system.

At the meeting, Guterres recognized that local and regional governments will be essential to the achievement of the major global sustainability agendas, and reaffirmed his office’s commitment to supporting achieving the 50/50 goal by 2030.

UCLG Co-President, Chair of C40 Cities, and Mayor of Paris, Anne Hidalgo, highlighted the particular role of cities in combatting climate change and the specific leadership role of women in this endeavor. Hidalgo also emphasized the will of all major local government networks to work together to collaborate with the UN.

Mayor of Bangangté and President of REFELA, Celestine Ketcha Courtés presented the ‘Be Counted’ campaign, which calls for better data on the proportion of seats held by women in local government, as part of the push to achieve SDG 5 on gender equality and women’s empowerment. She asked the Secretary General to specifically look at SDG 5 and 11, both of which will be essential to the achievement of all 17 SDGs.

President of Metropolis Women and Councilor for Feminisms and LGBTI of Barcelona, Laura Pérez, emphasized the role of cities in promoting sustainable development and in the achievement of gender equality.

Chair of the Women’s Institute of Mexico City, Teresa Incháustegui, recalled the way the Beijing Conference set the agenda on gender equality and reflected on the need to renew the global momentum in this area.

Mayor of Tevragh Zeina, Fatimetou Abd El Malick; Mayor of South Tangerang, Airin Rachmi Diany; Chair of the Women’s Institute of Mexico City, and Councilor of Paris, Marie Christine Lemardeley applauded the open spirit of the conversation and confirmed their commitment to continued collaboration with the UN Secretary General’s office.

UCLG’s statement to the CSW 61