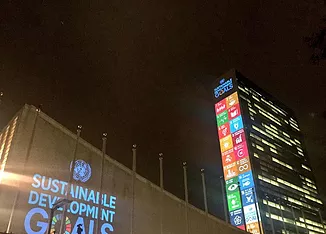 "We, the local and regional leaders gathered in United Cities and Local Governments and the Global Taskforce of Local and Regional Governments, have been here this week to make everybody aware that the Sustainable Development Goals – all of them – are at the core of our work." Kadir Topbaş, Mayor of Istanbul and President of UCLG

Local and regional governments from all over the world were at UN Headquarters in New York this weekend to witness the adoption of the 2030 Agenda for Sustainable Development. The Global Taskforce organized a number of events to celebrate the occasion and to assess the role of cities and local leaders in the 2030 Agenda going forward.

At an event on “Cities Driving Sustainable Development: Endorsing the SDGs and Committing to Their Implementation”, organized by UNSDSN, the Campaign for an Urban SDG, the Global Taskforce and the New School, UN Secretary General, Ban Ki Moon, praised the work of the Global Taskforce over the last three years. In a statement, delivered by Executive Director of UN Habitat, Joan Clos, he underlined the importance of the Global Taskforce’s joint strategy in advocating for the adoption of SDG 11 in the run up to the Habitat III Conference in Quito in October 2016. In this regard, CLGF Secretary General, Carl Wright, underlined that “it will be imperative to include decentralization in the New Urban Agenda as the basis for the implementation of the SDGs.”

The Mayor of Dakar, Khalifa Sall, pointed out that the SDGs are “a true revolution” because they are global and have been developed through wide consultation. “Until now global goals were defined without local governments, but the Post-2015 process has shown that we are able and ready to make this change,” he said.

Over the course of the week, mayors from the delegation, including, among others, Mayor of Istanbul and President of UCLG, Kadir Topbaş, Mayor of Banda Aceh, Illiza Sa'aduddin Djamal, and Mayor of Kitchener, Berry Vrbanovic, highlighted the fact that the achievement of all of the 17 new Sustainable Development Goals (SDGs) will depend on local governments.

In this regard, ICLEI Secretary General, Gino van Begin pointed out that “Given that 60 of the 169 indicators of the 2030 Agenda are related to work of local government, it will be key to ensure that ‘global’ meets ‘local’ in our action plans”. Similarly, Mireia Cañellas, Head of the Sustainable Department Unit of the Government of Catalonia, underlined that “While national governments provide guidance, funding, support and overarching strategies, subnational authorities will be ultimately responsible for the implementation on the ground.”

All SDGs are Local: Towards an Action Agenda in Habitat III 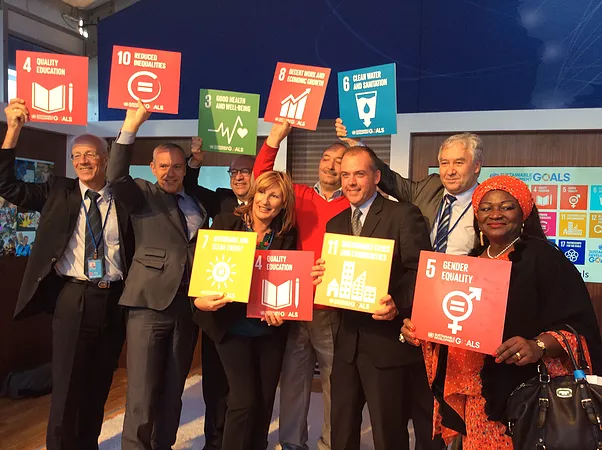 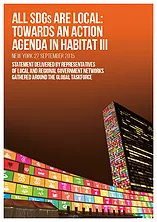 The Global Taskforce made a joint declaration to mark the summit for the adoption of the 2030 Agenda, entitled “All SDGs are Local: Towards an Action Agenda in Habitat III”.

In the declaration, local and regional leaders commit to playing their

part in the success of the 2030 Agenda and call for a new global governance system within a revitalized UN system. The declaration proposes greater participation in the UN for all stakeholders, and demands recognition of the unique democratic legitimacy of local governments in particular.

The declaration also celebrates the inclusion of SDG 11 on sustainable cities. The inclusion of Goal 11 was largely thanks to the advocacy work of the Global Taskforce and the broader urban community over the past year.

Furthermore, the text highlights out the need for the ‘localization’ of all of the 17 SDGs. Localization refers to the decentralization of powers and resources to ensure their implementation and monitoring. Localization will be essential if local governments are to live up to their potential in making the goals a reality on the ground. As the Mayor of Bogota, Gustavo Petro, said in New York, “technical solutions are the easy part of sustainable development policy-making. It is political decision-making and facing established interests that are preventing change that is more difficult. Communities need to drive the change.”

As Mayor of Kitchener, and UCLG Deputy Treasurer, Berry Vrbanovic, said, “To see how far we have come together deserves a celebration. However, work still needs to be done, and the Second World Assembly of Local and Regional Governments needs to be our focus as we work towards Habitat III.”