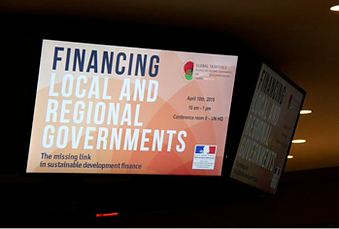 On the occasion of the hearings with civil society and the business sector organized by the United Nations General Assembly as part of the preparation of the third International Conference on Financing for Development (FfD3), the Global Taskforce of Local and Regional Governments organized a special session dedicated to “Mobilizing local finance to implement the Post-2015 Development Agenda” on 10 April.

The hearing was opened on 8 April in the presence of the current President of the General Assembly, Nicholas Emiliou, Ambassador of Cyprus, and Ban Ki‑moon, Secretary-General of the United Nations, as well as representatives from civil society and the business sector. In his speech, the Secretary-General of the United Nations stressed that the outcome of the “Conference in Addis Ababa would be crucial to ensuring an ambitious Post-2015 programme and a global agreement on climate change later this year.”

During his intervention in the first round table on infrastructure financing, the Mayor of Rabat (Morocco) and Treasurer of UCLG, Fatallah Oualalou, recalled that "local governments play a key role in the social and economic development of their territories, and that a significant part of the investments needed to achieve the Sustainable Development Goals (SDGs) would fall under their competence." However, the shortcomings of local financing systems restrict their potential to intervene; hence increasing fiscal decentralization remains a major development challenge. In this regard, the international community must integrate the issue of local financing into the reflections it brings to important upcoming conferences.

The special session on 10 April, organized by the Global Taskforce with the support of the French Permanent Representation to the United Nations, began with an intervention from the French Ambassador François Delattre, who stressed that “if cities are key actors in sustainable development, we hope that [...] the Conference in Addis Ababa gives them all the space they deserve.” The Norwegian Ambassador, Geir Pedersen, co-facilitator of the FfD3 process, also recalled the magnitude of the challenges urbanization poses and the investments needed to address these. Juwang Zhu, Director of the Division for Public Administration, who spoke on behalf of the Assistant Secretary General of UNDESA, Lenni Montiel, welcomed the recommendations of the Global Taskforce and recalled that “[...] of the 17 goals forecasted in the SDGs, all but one require actions and financing at the local level”.

To open the debate, Paul Smoke from the University of New York presented his observations on the Zero Draft; the draft declaration for Addis Ababa. “This draft,” he said, “made a step forward in the recognition of local governments in paragraph 36, but it is not enough. Without the effective decentralization of financing, the achievement of the SDGs will be impossible.”

In the presence of around fifty representatives of Member States, United Nations agencies, civil society and the business sector, the debate then continued around two round tables on: (i) t domestic resources mobilization at territorial level; and (ii) strengthening long-term financing. During the first round table, moderated by Christian Dupuy, Mayor of Suresnes (France), the Mayor of Rabat also referred to the Zero Draft and, building on the Moroccan example of VAT distribution, stressed the need to promote a better sharing of resources between the national and local levels, and to strengthen local taxation. Abede Zeluelfrom the Ethiopian Ministry of Urban Development presented their experiences in land management following the decentralization reforms of the early 2000s, which helped to increase local resources and better control urban development. In response to these interventions, Jérémie Daussin‑Charpantier from the French Development Agency stressed the need to expand the financing strategies and tools available to cities (local banks, specialized agencies, loans, etc.) and support the strengthening of the capacities of local governments. Aniket Shah, representing UN Sustainable Development Network Solutions (UNSDSN), closed the session by calling for the creation of mechanisms to monitor the financing of sub-national governments, in particular their creditworthiness. He also recalled that in the light of past trends, major reforms were needed to encourage private investment in basic infrastructure in developing countries.

The second round table was moderated by Barbara Samuels, the Director of the Global Clearinghouse for Development Finance, who presented experiences in mobilizing private funding for local investment in emerging countries, and highlighted the need to strengthen the capacities of local governments and to create mechanisms that are better adapted to enable them to access the market. Mohammed Benahmed from the Fonds d’Equipement Communale du Maroc [Fund for Moroccan Township Facilities and Infrastructure], presented the experience of his institution in the financing of Moroccan cities, combining technical assistance and the mobilization of funds through banking intermediation. Khady Dia Sarr, Director of the Project on Municipal Financing for the city of Dakar (Senegal), presented one of the first projects to raise funds through financial markets carried out by a West African city. Commenting on these interventions, David Jackson of the United Nations Capital Development Fund (UNCDF) presented their experience in mobilizing public and private funds in Africa (pool funding) to finance small infrastructures and services in cities. Tove Maria Ryding from Eurodad stressed that increasing domestic resources first requires greater control over tax evasion by large companies, which in some countries may exceed the amount of official development assistance. In relation to public-private partnerships, she also emphasized the need for a strong public sector that is able to ensure universal access to quality public services and infrastructure. 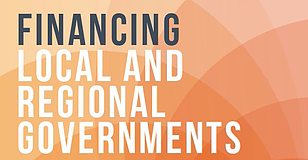 To conclude the session, Philip McPhee (Bahamas), the President of the Caribbean Association of Local Government Authorities and Vice-Chair of the Commonwealth Local Government Forum (CLGF), presented the recommendations of the Global Taskforce for the FfD3 Conference to Member States and the international community: