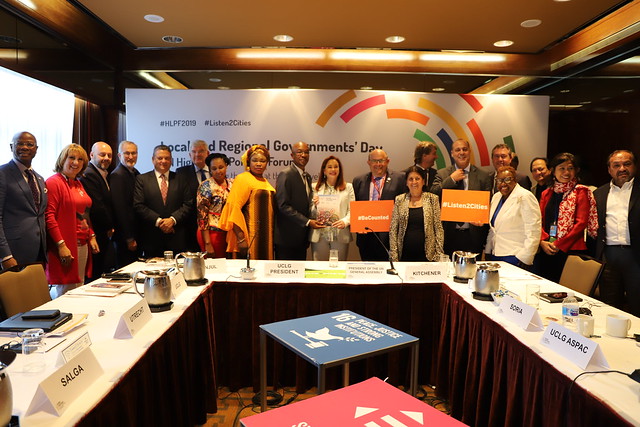 Last 15-17 July, the local and regional governments’ delegation, with over 120 representatives gathered within the Global Taskforce, attended the 2019 High-Level Political Forum (HLPF) to convey a message of urgency and hope: achieving the Sustainable Development Goals (SDGs) is possible if the role of local governments is recognized and resources for localization are unlocked. Mayors met the UN Secretary General, Antonio Guterres; the President of the General Assembly, María Fernanda Espinosa, and the Executive Director of UN-Habitat, Maimunah Sharif. The Global Taskforce presented its third report on the localization of the SDGs, and delegates contributed to assess progresses in the implementation of the Goals from a local perspective in the framework of the Local 2030 event.

“You are UN”: a strengthened relation with the United Nations 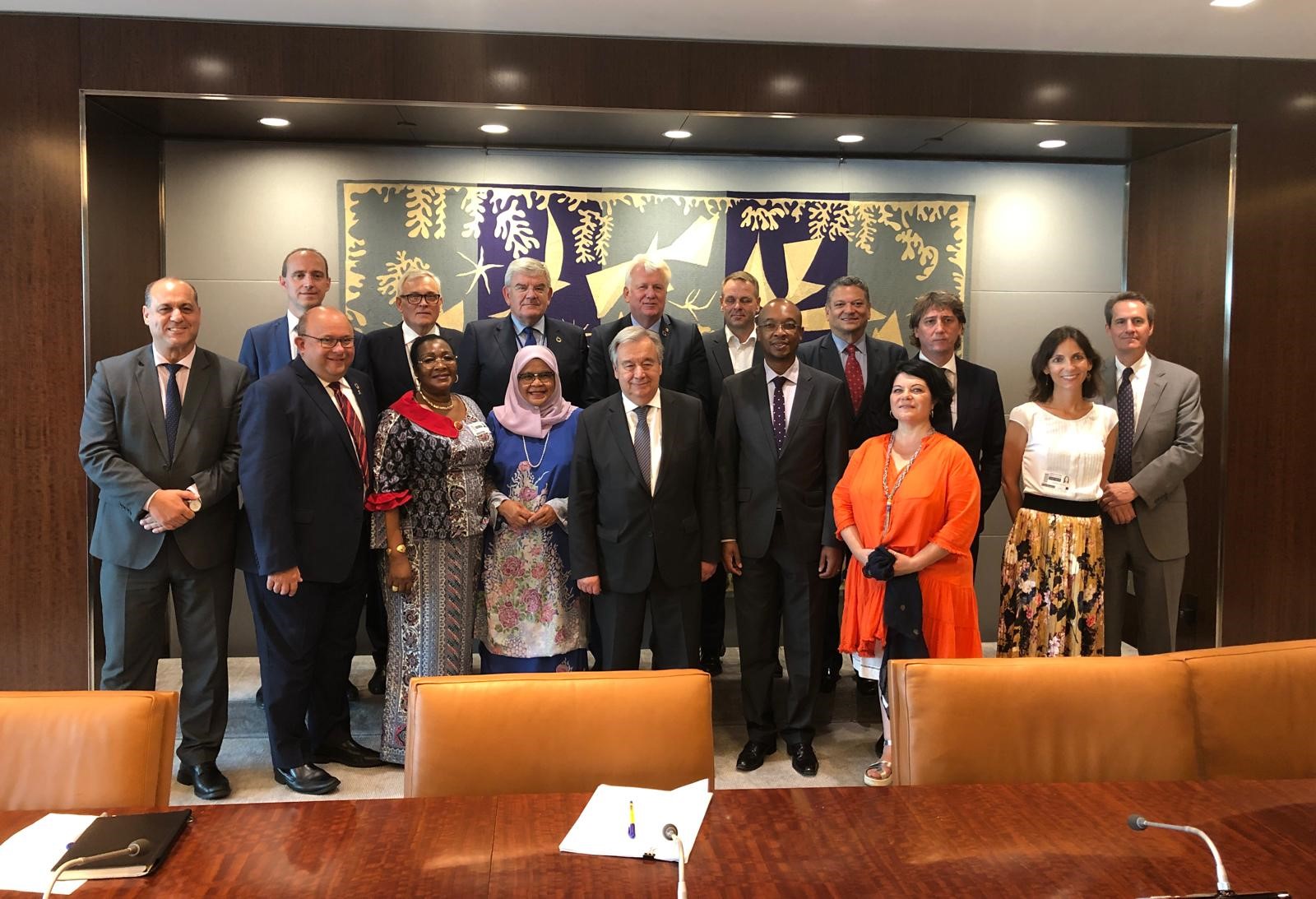 A key moment for the delegation was the meeting with the United Nations Secretary General, Antonio Guterres on 17th July. During the meeting, the constituency expressed its full commitment to localization to leave no one and no place behind and their quest for a seat at the global table as partners in transformation to truly embrace territorial cohesion.

Furthermore, during the Local and Regional Governments Day the delegation welcomed the President of the United Nations General Assembly, María Fernanda Espinosa who throughout her mandate actively supported the constituency. In her remarks, the President underlined the principle of subsidiarity highlighting that the only way to achieve the SDGs is to localize the decision-making processes. In her words:

"I am in your team. You, local governments, are the 'walk the talk'; the human face of the SDGs; you are the traction for what we do: access to water, mobility, fighting climate change. You should be in the United Nations". María Fernanda Espinosa, President of the United Nations General Assembly

For her part Maimunah Sharif, Executive Director of UN-Habitat highlighted the need to foster multi-level dialogue adding, “The time has come to renew trust between levels of government. All levels must take their shared responsibility and increase accountability!”

These messages were met with enthusiasm by Mayors and Governors present, as well as the GTF networks representatives attending the LRGs Day – UCLG, C40, ICLEI, Regions4, AL-LAS, Mercociudades, FLACMA, CGLF, PLATFORMA, CEMR, ASPAC, Metropolis. The message was clear: as an organized constituency, and the level of government closest to citizens, local and regional governments are committed to leave no one and no place behind. We call on Member States and the international community to recognise us as partners for transformative agendas and to embrace local governance as driver of territorial cohesion. Local and regional governments are ready to be part of a United Nations for all!

Local and regional governments’ contribution to upscale efforts for localization 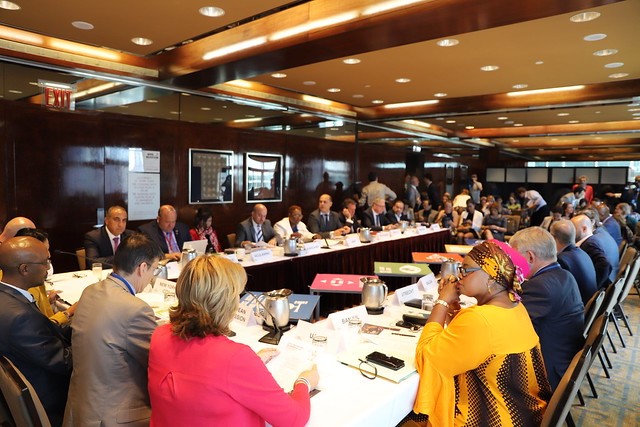 The Statement of the Local and Regional Governments constituency to the 2019 HLPF was further adopted by the delegation during the Local and Regional Governments’ Day. The statement shares the sense of urgency expressed by the UN Secretary General, Antonio Guterres, to achieve the SDGs: it calls on national governments and international institutions to upscale efforts for greater cooperation, and demand the national and international coordination mechanisms, as well as enough resources, to be put in place to make this possible.

Local 2030: multi-stakeholder exchanges to review localization of the 2030 Agenda

The Local 2030 Special Event on 16-17 July was the occasion to highlight local contributions to the achievement of the SDGs under review, as well as the interlinkages between national, regional, and local action on these SDGs.

The Mayor of Seville Juan Espadas presented the Seville Commitment which had a relevant space as a cementer of a local-global commitment to achieve the SDGs. In the session dedicated to SDG17 on partnerships, Jan Van Zanen, Mayor of Utrecht and President of VNG, intervened highlighting that public policies need to be the result of dialogues and participatory processes. For his part, Íñigo Urkullu, President of the Basque Country Region explained how the sustainable financing policy of the region is aligned with the SDGs.

In the afternoon session dedicated to SDG13, Mayor of Sao Paulo, Bruno Covas shared how the city is taking action to prepare for the climate emergency. To the discussion, the recently elected President of SALGA, Thembilise Nkadimeng, added how learning from international networks of cities and regions have helped South African municipalities to advance in climate policies.

On SDG8, Mayor of Genk Wim Dries emphasized that decent work and green jobs should be understood as part of local and regional governments’ strategies. Berry Vrbanovic, Mayor of Kitchener and UCLG Treasurer, strengthened the key role that local and regional governments play, as employers first, to ensuring social dialogue by adopting bold sustainable procurement policies.

Wednesday 17th was devoted to SDG, 10, 4 and 16. Johnny Araya, Mayor of San José emphasized the key role that education plays in reducing inequalities, linking SDG 10 and 4. Mohamed Sefiani, Mayor of Chefchaouen, highlighted the need to link the Right to the City in the implementation of the SDGs. Bernadia Tjandradewi, Secretary General of UCLG ASPAC highlighted the key role that local and regional governments play in building safe and inclusive environments for live-long education. Andris Ravins, Mayor of Jelgava and Vice-President of the Latvian Association of Local Governments echoed the need of supporting youth in accessing education and training. Greg Munro, Secretary General of CLGF emphasized the need to harness the power of local cultural context in providing quality education to all. Carlos Martínez, Mayor of Soria and Vice-President of UCLG shared how local and regional governments are taking action to achieve SDG16, and so the 2030 Agenda.

This year, the constituency paid attention to the emergent movement of Voluntary Local Reviews – a process that shapes and feeds global reporting on the implementation of the 2030 Agenda from a local perspective.

During the Local 2030 event, leading cities in local reporting presented their experience in developing Voluntary Local Reviews: Jan Vapaavuori, Mayor of Helsinki; Joana Balsemao, Councillor of Cascais; Sophie Howe, Future Generations Commissioner of Wales; Francisco Resnicoff, Undersecretary for International Relations of Buenos Aires; Junko Ota, representative of Kitakyushu; Patrícia Menezes, from the City of Barcarena, and Alexandra Hiniker, from New York City. They all underlined the relevance of local reporting as a process to involve city stakeholders and align city action with the SDGs, as well as an effort at the international level to contribute to the achievement of global agendas.

In this framework, the Learning Module 3 on Voluntary Local and National Reviews was launched as a tool for the constituency to not only understand national government reporting but to provide guidance for local reporting.