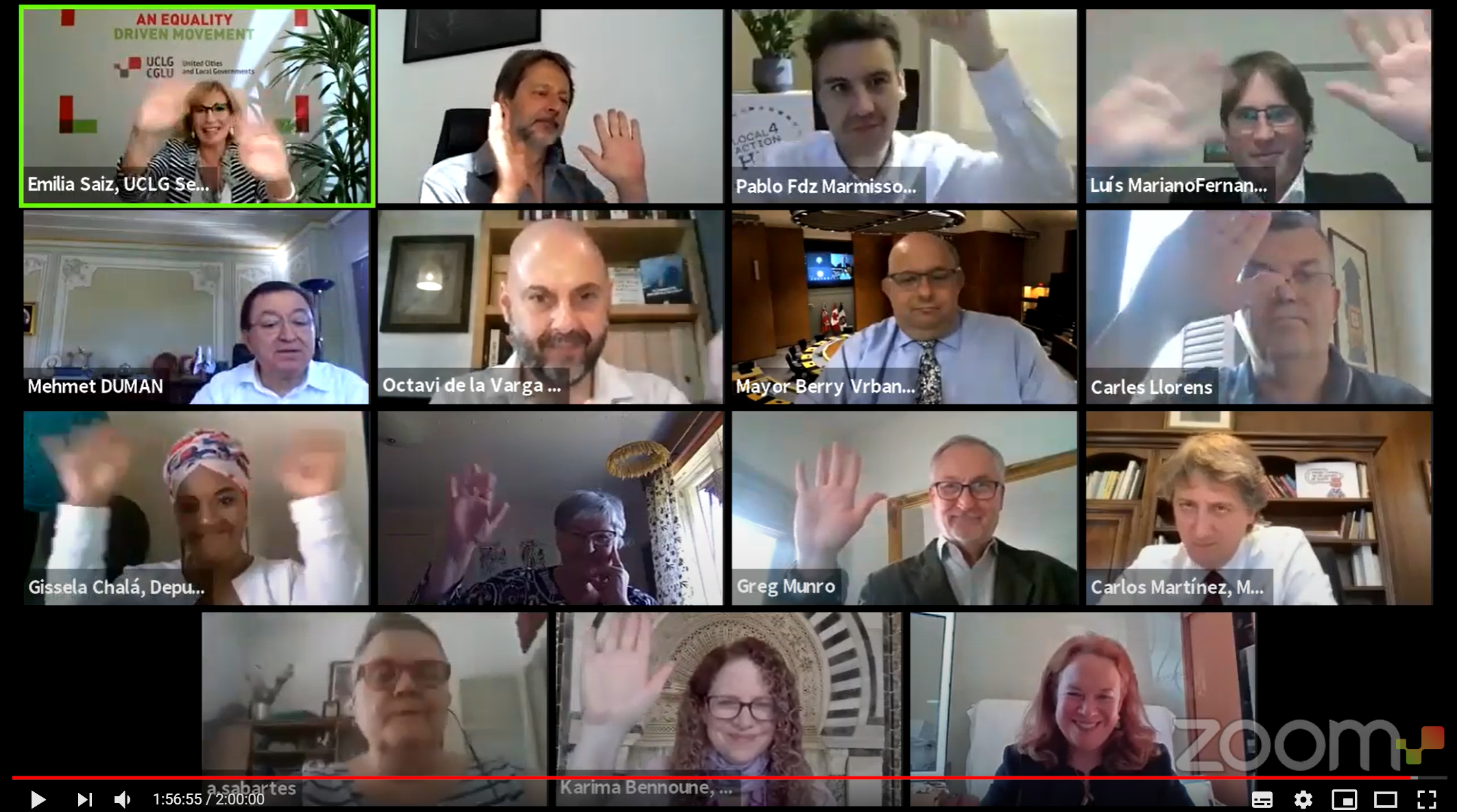 Under the title “Accelerating transformation from the ground-up in a post-Covid era”, the Local and Regional Governments’ Day brought together the delegation of local and regional governments at the High-Level Political Framework, gathered within the Global Taskforce, to discuss and agree on the constituency's Statement to the HLPF; define the priorities of the constituency for the post-COVID19 era, and present the fourth “Towards the localization of the SDGs” report.

Over 40 panelists, with local and regional leaders and ministerial representatives from all over the world, members from the international system such as the Undersecretary General of the United Nations Maimunah Mohd. Sharif, and Director for Planet and Prosperity of the European Union Carla Montesi, over 200 participants that ranged from the local and regional sphere to academia and the United Nations, showcasing not just the commitment from local leaders from all over the world to call for a place in the discussions of the recovery in line with the sustainable development goals, but also the increased acknowledgment of the role that local and regional governments are playing in the recovery and in the pathway to achieve the goals.

The session was opened by Emilia Saiz, Secretary General of UCLG, who stated that the Local and Regional Governments’ Day is now is a tradition of the HLPF, and that it is the duty of the Networks gathered in the Global Taskforce to ensure that local voices are heard, and that those of elected officials are listened.

Jan Van Zanen, who highlighted how the presence of the constituency in the framework of the HLPF, and in particular during the LRG Day, was a demonstration of the continued commitment of our constituency to the global agendas and to multilateralism. Mayor Van Zanen highlighted the importance of developing an ecosystem that would foster the delivery of basic services, and argued for the need to co-create the transformation towards a more sustainable planet.

Maimunah Mohd. Sharif, Undersecretary General of the United Nations and Executive Director of UN-Habitat, highlighted the value of decentralized cooperation and praised the experiences shared by local and regional governments in the Live Learning Experiences, co-organised by UCLG, UN-Habitat, and Metropolis, that had been critical in sharing knowledge, enhancing knowledge and solutions in the fight against the pandemic. Said experiences, she stated, had raised the voice of local and regional governments to the next level, strengthened the advocacy of the constituency towards national and internationals institutions, and called to empower local communities, harnessing the lessons learnt from the experiences, to leave no-one behind.

Carla Montesi, Director for Planet and Prosperity, European Commission, argued for the need to build back better, and reminded of the importance of a green, digital, and resilient recovery. Innovative policies, driven by local and regional governments, will be essential in a recovery that leaves no-one behind.

The introductory panel also counted with the participation of Bernat Solé, regional minister of Foreign Action of Catalonia, who called for a strong multilateralism as a way to meet current and further challenges, and as a means to ensure a new system that considers all stakeholders as partners in the transformation that the world needs. Marina Ponti, Director of the UN SDG Action Campaign, commended the role of local and regional governments in the recovery, and as essential actors to rebuild trust among citizens and their institutions. It was closed by the Mayor of Xi’an Li Mingyuan, who called on local and regional governments to cooperate in order to overcome the pandemic.

One of the key goals of the panel was to showcase the findings of the constituency’s report to the HLPF, “Towards the Localization of the SDGs”, that shows how localization movement is growing -if irregularly- all over the globe, with local and regional governments now participating in 55% of the Voluntary National Reviews submitted to the High-Level Political Forum.

The recognition of Voluntary Local and Subnational Reviews, the document states, is a symptom of the increased importance of the voices of our constituency in the international sphere. Emilia Saiz shared some of the key recommendations of the Report, among them the need to galvanize forces for localization in the national strategies, empowering local and regional governments in terms of powers and resources, and ensuring a renewal of the multilateral system that would allow local and regional governments and their communities to be represented and be a part of the collective decision-making processes.

Moderated by Bernadia Irawati, Secretary General of UCLG-ASPAC, the participants of the panel showcased local actions and recommendations during the pandemic. Madelaine Y. Alfelor-Gazman, Mayor of Iriga, highlighted the importance of the networks gathered within the Global Taskforce as catalysts for participation and representation of local and regional governments in the international agendas. Pilar Díaz, Mayor of Esplugues de Llobregat and Deputy Secretary of International Relations of the Barcelona Provincial Council, argued for the importance of protecting the most vulnerable showcasing the initiatives of her city targeting “0 hunger” among its citizens. Noraini Roslan, Mayor of Subang Jaya, showed the efforts of her city in engaging the private sector in the recovery, since it is integral to maintain the livelihoods of communities, in particular those that are most vulnerable and either working in or being pushed to work in informality due to the outbreak.

Aleksandr Zhirkov, First Deputy Chairman of the State Assembly of the Republic of Sakha (Yakutia, called on efforts for the recovery to reduce our burden on the environment, whereas Valérie Dumontet, Vice-president of Aude Department in France, and president of SDGs working group at Cités Unies France, argued for the crisis to act as an opportunity to design policies that are adapted to the youth, who will be hit harder by the uncertainty of the pandemic. Prudence Rubingisa, Mayor of Kigali, stated that the science needs to drive many of the decisions in the recovery of the pandemic, but that we cannot leave the wellbeing of local communities as a side note.

An all-women panel highlighted the value of basic service delivery in the immediate response of the pandemic. Carola Gunnarsson, Mayor of Sala, and Vice President of SALAR, UCLG VP for Europe, stated that public service provision is the solution to the challenges of the COVID-19 pandemic, and called on national governments to provide the resources and powers for local and regional governments to ensure their sustainability in order leave no-one and no place behind.

Octavi de la Varga, Secretary General of Metropolis, moderated the following panel on the political context and the priorities of local and regional leaders in the aftermath, calling on the need to rethink common goods that need to be preserved.

Rohey Malick Lowe, Mayor of Banjul, showcased the endeavours of the city in ensuring gender equality, by partnering with UNDP to raise awareness, in particular about the need to protect women in public spaces. Laia Bonet, Vice Mayor of Barcelona, also argued for the need to transform cities in a way that works for all social groups, fostering different models of consumption and production, and promoting women’s leadership at all levels. Mathieu Hanotin, Mayor of Saint Denis, argued that unequal access to health had left vulnerable populations more exposed, and it is essential to plan taking into consideration unequal access to health and resources.

Eugéne Aka Aouelé, President of the Association of Regions and Minister of Health and Public Hygiene of Côte d'Ivoire, shared the efforts of the country in curbing the worst effects of the pandemic. He argued for the importance to learn the lessons of the crisis to strengthen our resilience.

Mohamed Saadie, President of the Union of Dannieh Municipalities and President of UCLG-MEWA, further emphasized how the most marginalised groups were under stress during the outbreak, how this situation called to rethink our models in order to provide resources to those in need, and the importance of fighting hate speech and racism in a critical moment.

Fernando Gray, Mayor of Esteban Echevarría argued for the need to defend basic services and the public sphere as service providers, in a moment in which it is more necessary than ever. Coordination among spheres of government and including the civil society in the response was seen as essential to the recovery.  Luis Mariano Fernández, Secretary General of ZICOSUR, commended the efforts of decentralized cooperation and the need to step away from “every man/woman on their own” approaches to build back from the pandemic. Mohamed Sefiani, Mayor of Chefchaouen, argued that the recovery needs to be based in local economic recovery. For intermediary cities, he argued, it is critical to do so, and to place value in local products and in the links between the urban and rural sphere.  La reconstruction doit se baser sur le développement économique local. Pour les villes intermédiaires, il est important de valoriser les produits locaux, les liens rural-urbain et promouvoir l’économie sociale et solidaire.

The final part of the session was moderated by Greg Munro, Secretary General of CLGF, and aimed at looking ahead of the pandemic. Munro argued that now everybody is aware that “business as usual” is no longer a response, and that the SDGs are even more important than ever.

Culture was an important part of the panel, with vice mayor of Rome Luca Bergamo introducing the 2020 Rome Charter, in collaboration with UCLG, and with 22 cities and 50 Networks involved. It is a critical step, he argued, in developing cultural policies that bring about a new paradigm. This approach was shared by Karima Bennoune, UN Special Rapporteur on Cultural Rights, who argued that cultural rights are key to the implementation of universal human rights, particularly at the local level.

Looking forward Berry Vrbanovic, Mayor of Kitchener argued that the local self-government will be essential to carry out actions at all levels. It is critical to ensure that the wants, and the needs, of citizens, are present in all governance mechanisms

Penny Abeywardena, Commissioner of the Mayor’s Office for International Affairs, City of New York commended the session as an opportunity to maximize good ideas, and showcased the creation of New York’s Voluntary Local Review, arguing that it represents the wish of local and regional governments to be at the decision-making table.

Gissela Chalá, Deputy Mayor of Quito, argued that solidarity is the critical focus for the future. The crisis, she argued, provides us with an opportunity to plan new cities from, and with, public policies, with a focus on gender and human rights. Carlos Martínez, Mayor of Soria, shared this idea and argued further for the need to change governance culture, arguing for the concept of co-governance with communities, driven by policies that acknowledge the wellbeing of all communities.

Mehmet Duman, Secretary General of UCLG-MEWA, commended the launch of the Report on Localization, and called on local and regional leaders to disseminate it through the world.

Sabine Friezer, Chief of UN Women’s Leadership and Governance Section, commended the efforts of the Global Taskforce in regards to gender equality. She ended the panel on a call for local and regional governments to help the international system identify the concrete priorities for 2030.

The GTF will continue the push for the localization of the global agendas and for transformation driven from the bottom-up during the Local and Regional Governments Forum. Don’t miss it!