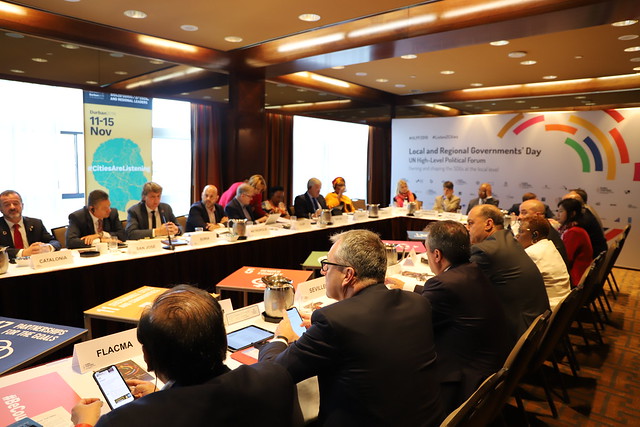 The constituency of local and regional governments held a Local and Regional Governments Day on July 15th, with the aim of presenting a clear and coordinated message as the Global Taskforce of Local and Regional Governments to the High Level Political Forum, to be seen as partners for transformation, representatives from the networks of the Global Taskforce -UCLG, C40, ICLEI, Regions4, AL-LAS, Mercociudades, FLACMA, CLGF, PLATFORMA, CEMR, ASPAC, Regions4 Metropolis, and the Global Parliament of Mayors - presented their views on how to accelerate implementation of the Sustainable Development Goals (SDGs).

The delegation presented the messages reflected in the Statement of the Local and Regional Governments Constituency to the High Level Political Forum, with Roheyatou Lowe, Mayor of Banjul, reminding that local and regional governments are “the government of the grassroots”, and that they “need autonomy to enable us to transmit the messages of the communities and respond to them”. This was shared by Ismael del Toro Castro, Mayor of Guadalajara who reminded that local and regional governments “are the first door that our citizens knock when they are looking for answers, whether they are asking about basic services, better housing conditions, or addressing the consequences of climate change”. He asked to address the SDGs as one, and highlighted the importance of SDG 11 for acknowledging the realities of human settlements.

Peter Kurz, Mayor of Mannheim, called for the UN system to “take the New Urban Agenda Seriously”, since it reaffirms “the paradigm shift for governance, financing, and planning” and is indispensable to achieve the SDGs. Karen Freeman-Wilson, Mayor of Gary and NLC President brought to the spotlight the reality that cities are already implementing successful programmes, and it is essential to support cities in order to reduce poverty, improve equal access to opportunities.

Mayors also addressed the climate emergency, with Mohamed Sefiani, Mayor of Chefchaouen, stating that “we need to move from political commitments to coherent programmes and funding plans to address the climate emergency”, and Johnny Araya, Mayor of San José, calling for a coordinated response to climate change to achieve zero emissions, and address the SDGs as an opportunity to “rethink the universal challenges and our models of development”.

Carlos Martínez, Mayor of Soria, highlighted the shift in how local and regional governments were considered in the UN system, stating that “we are moving from being guests, to participating in the conversation, to being seated at the negotiation table”, and Mayor of Kitchener Berry Vrbanovic highlighted the importance of being at the table as the SDGs are being reviewed, and called to “reiterate that LRGs are the level of government the closest to citizens, LRGs are committed to leave noone, no place behind”, as we are gearing up for the SDG Summit. Mayor Vrbanovic also presented the 5 conclusions of the Local and Regional Governments’ Report to the HLPF. 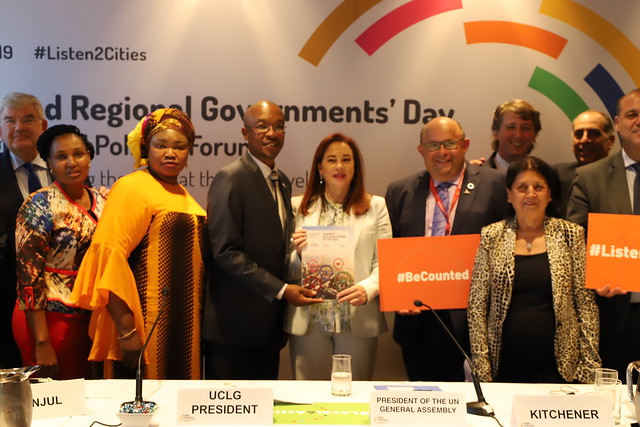 Representatives from the networks gathered in the Global Taskforce addressed the national coordination mechanisms for the implementation of the 2030 Agenda, and what was needed to achieve the global goals after the first four years of the adoption of the SDGs.

Political leadership from local and regional governments was seen as a key priority to achieve the goals, with Secretary General of CLGF Greg Munro stating that “We need more than just technical leadership to align strategies. We need political hearts and minds” to achieve the global agendas. Kale Roberts, form ICLEI, reminded that we have been, as a constituency, advocating for the global sustainability frameworks to listen to cities. “Now”, he stated, “the world is listening and we are here to show how multilevel governance is needed for success.”

Gearing up for the upcoming SDG Summit in September were among the issues discussed during the day, with Secretary General of Metropolis Octavi de la Varga stating that the networks that are preparing for the Summit are converging towards a same objective: to think about complex realities in different ways.

Cementing a local-global movement to achieve the SDGs

The Seville Commitment was also present at the Local and regional Governments Day, with Mayor of Seville Juan Espadas, Mayor of Utrecht Jan Van Zanen and representative of the Spanish Government Gabriel Ferrero recalling the necessity to articulate a multi-level coalition and cement a local-global movement to accelerate achievement of the 2030 Agenda.

“The different speeds of the political actors must be coordinated, whether it be the State, or the citizens, or the voices that call us to accelerate.” Juan Espadas, Mayor of Seville

“In the past three years we have been stock-taking. It means understanding “how are we doing” step by step. Today we are listening and we are calling to “declare action”. Jan van Zanen, Mayor of Utrecht

"We will not advance - much less achieve - the SDGs if we insist on top-down strategies. We need to empower local leadership, and its organized movement, in order for global transformation to be effective.” Gabriel Ferrero, Director General of Sustainable Development Policies of the Spanish Government

Local and regional involvement in the monitoring of the global agendas, critical to achieve the goals.

The third Local and Regional governments’ report to the HLPF was launched during the day, in a session on monitoring. The report build on contributions by all GTF networks and showcases how local and regional governments have mobilized for the localization of the SDGs across all continents.

It does, however, show the fact that there is still work to do, in particular at the national level, to integrate local perspectives in the monitoring and reporting processes, since only 49 countries out of 143 consulted local and regional governments in the national coordination mechanisms for the implementation of the 2030 Agenda in this first 4-years cycle.

Marlène Siméon, Director of Platforma, expressed her concerns in regards to the involvement of associations of local and regional governments in the monitoring of the global agendas, stating that “under half of the associations in Europe have been consulted within the framework of their national coordination mechanisms”, and stating that this needs to change in order to impact how governance is design.

The session on monitoring also had a session for the discussion on the Voluntary Local Reviews (VLRs), in which participants highlighted the importance of the VLRs in being able to develop coordination among spheres of government and stakeholders using the common language of the SDGs. VLRs are also an opportunity for learning among governments and highlight the needs of local government, in particular in capacity-building, data, and financing in order to achieve the agendas.

The City of New York presented its second Voluntary Local Review in 2019. Penny Abeywardena, Commissioner for International Affairs, City of New York, presented the VLR and argued for the importance of local monitoring and peer learning stating that the city is  “committed to support more cities to do a similar reporting exercise, and to have a space for them to present these VLR to the global conversation.”

"I am in your team. You, local governments, are “walking the walk”; the human face of the SDGs; you are the traction for what we do: access to water, mobility, fighting climate change. You should be in the United Nations". María Fernanda Espinosa, President of the United Nations General Assembly 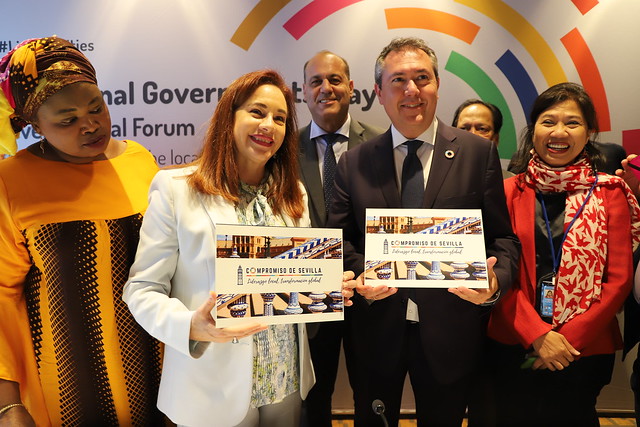 The final moment of the LRG Day saw a dialogue among the organized constituencies towards the World Summit of Local and Regional Leaders, with representatives from Academia, Habitat for Humanity, Habitat International Coalition, Global Platform for the Right to the City, the Huairou Commission, AARP, Slum Dwellers International, and WIEGO.