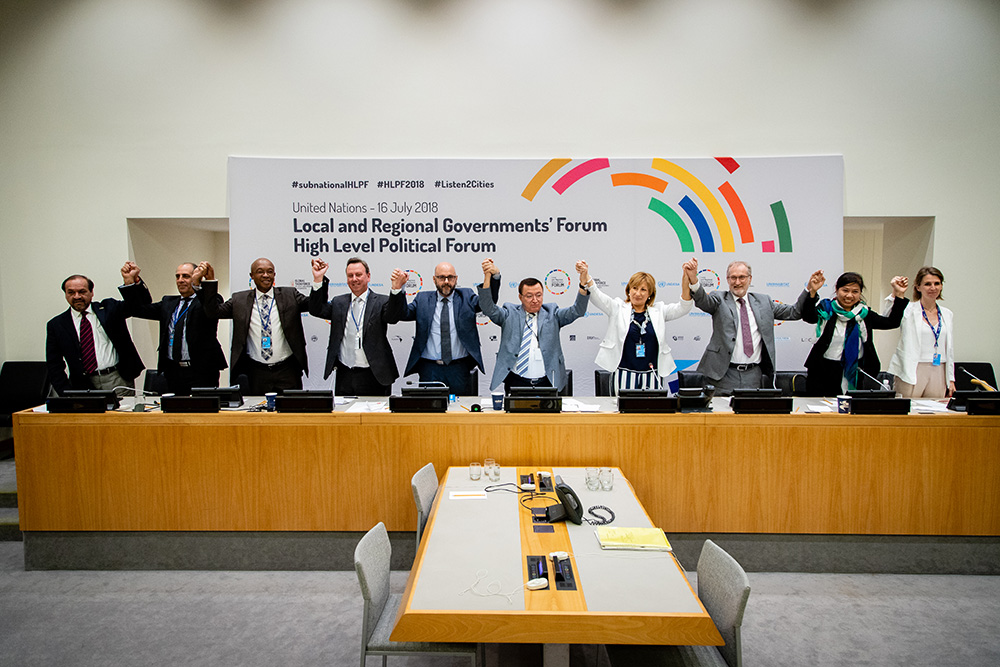 The High-Level Political Forum (HLPF) is the main United Nations platform on sustainable development, and plays a central role in the follow-up and review of the 2030 Agenda at the global level. For the first time, the Global Taskforce of Local and Regional Governments has organized the Local and Regional Governments’ Forum in the framework of the HLPF, together with the United Nations Department of Economic Affairs (UNDESA), UN-Habitat and the Local2030 network.

With the aim of securing a seat at the global decision-making tables, the Forum has provided an unprecedented opportunity for local and regional governments constituency to call for the inclusion of their perspectives in the assessment of the global agendas.

“The action agenda and the agenda of solutions are agendas of the local level” Agnès Langevine, Vice President of the Occitanie Region

Based on the 2nd local and regional governments’ report to the HLPF, “Towards the localization of the SDGs”, Parks Tau, President of UCLG, congratulated the hundreds of frontrunner cities and regions that are implementing inspiring policies to promote the transformation towards sustainable and resilient cities and societies. Parks Tau also highlighted that “clearer, indistinct high-level political support is needed if we want to unlock the full potential of local ownership and action.”

#CitiesforHousing - Fighting back against the commodification of housing

Throughout the course of six sessions, structured as panels, the Local and Regional Governments’ Forum tackled some of the more pressing issues related to prioritizing a rights-based approach to accelerate the localization process, with a special emphasis on giving life to the global agendas at the level of the cities. Furthermore, topics such as multi-level governance and dialogue between the different spheres of government, as well as how to implement and monitor the global agendas, were featured prominently throughout the day.

A sentiment that was shared throughout the various panels was the need to place people at the centre of the development agenda, and that means promoting secure, decent and affordable housing for citizens.

“Full citizen participation and the inclusion of everyone begins with those who find refuge in our cities. It starts with the child who wants to rent a book in a library regardless of their legal status”, Valérie Plante, Mayor of Montreal.

The Declaration of Cities for Housing was presented and upheld by the Mayor of Barcelona and Co-President of UCLG, Ada Colau, including the concrete actions that cities are already taking, which could embolden others to take action. So far, cities such as Montevideo, Montreal, New York, Paris, Berlin, Durban and Madrid, following the call of Barcelona, have adopted this declaration, which strives to become a commitment for cities everywhere

“This is significant: city leaders are taking concrete action to bring life to the words of the Cities for Housing Declaration. they will embolden other cities to take action”. Leilani Farha, Special Rapporteur of the UN for Adequate Housing

“We are suffering a process of capital financialization. They arrive in our cities and speculate with our houses. This process is making citizens’ lives more difficult, and expensive.” Ada Colau, Mayor of Barcelona and Co-President of UCLG.

Moving from acknowledgement to a dynamic dialogue between spheres of government 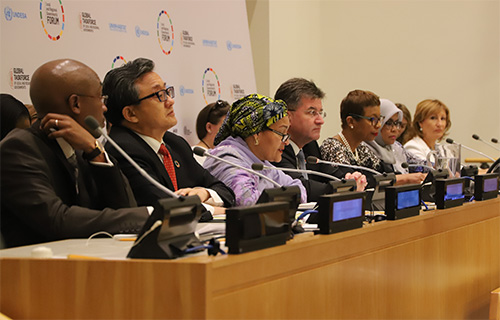 “The driving force and creative energy of local and regional governments is instrumental to reframe how the world implements the Global Agenda.” Amina Mohamed, Deputy Secretary General of the UN

[Read the statement of Amina Mohamed, Deputy Secretary General of the UN during her opening remarks at the Local and Regional Governments' Forum]

This call was echoed by the Mayor of Bonn and President of ICLEI Ashok Sridharan, inspiring participants to join him in choosing hope, building and harnessing the collective power of local and regional governments, in particular to leave no-one and no territory behind in the quest for sustainable and resilient societies. Carlos Martínez, Mayor of Soria, stressed the need for the UN and local and regional governments to speak as equals in order to truly become allies in the localization process.

“SDGs are implemented in cities, but not just in megacities. We need to address the potential of intermediary cities in the localization process.” Mohamed Sefiani, Mayor of Chefchaouen

The more innovative proposals are those that come from civil society. Coincidentally, the cities and regions in which the ownership of the Goals is more advanced are also those where cooperation between local and regional governments is more advanced, especially on issues such as housing.

“Taking the lead requires much more than local action, it requires true leadership at all levels” Ashok Sridharan, Mayor of Bonn and President of ICLEI 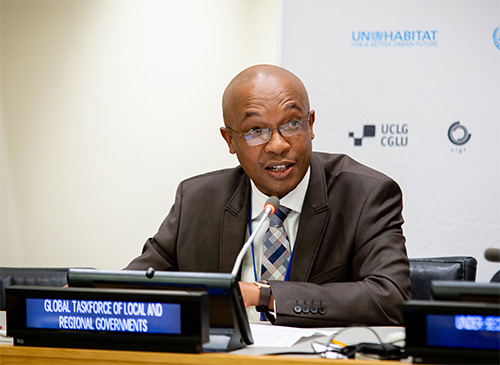 In the different panels, the outlying message was that local governance is where synergies between the different global agendas, national strategies and local plans happen. President of UCLG and the South African Local Government Association (SALGA) Parks Tau argued that, to keep providing essential services to citizens, rethinking local and regional governments’ access to finance is a necessity, and that local and regional governments need support and enabling frameworks to further their capacity to deliver.

Further, convention financing is not reaching the territories most in need. Representatives from regions, in particular, emphasized the urgency to provide technical assistance to those territories left behind, such as rural or peri-urban areas. Convention financing is not enough, and “despite our best efforts, funds remain limited, in particular for the SDGs” said Innocent Uwimana, President of the Rwanda Association of Local Government Authorities, Chairman of the Gisgara District. 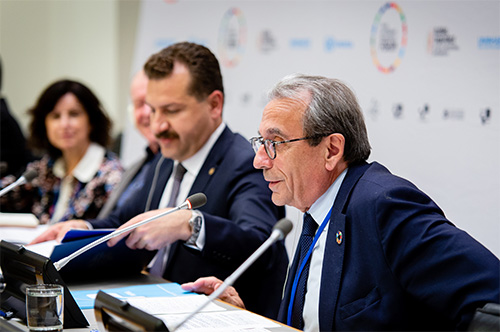 The first step to address this is to consolidate fairer and predictable intergovernmental financial frameworks. Technical innovations to improve local governments’ capacities to collect internal resources may also be used, provided that regulatory frameworks enable them do so. However, several local and regional governments also stressed the need to find innovative and responsible ways for cities to access external long-term financing.

The second idea that was present throughout the panel is that local governments need regulatory and financial capacities to enable experimentation at the local level. This is a shared lesson that mayors brought to the Forum, highlighting the potential of participatory approaches to engage youth or even migrants. As Roland Ries, Mayor of Strasbourg and Co-President of UCLG said, specific financing is needed for experimentation and to incentivize stakeholders to participate, including citizens, civil society, the private sector and development banks.

A High-Level Luncheon took place at midday in the framework of the Local and Regional Governments’ Forum. It represented a space for the sharing of knowledge between participants, particularly local and regional leaders and representatives of different national governments. Private sector partners, such as the Global Compact, as well as major stakeholders took part, which proved to be essential to further dialogue and facilitate relationships between different stakeholders.

The High Level Political Forum saw the adoption of the Statement of the Local and Regional Governments gathered within the Global Taskforce. The Statement reinstated the various  commitments that the constituency is undertaking towards the localization of the SDGs, as well as the political will of local and regional governments towards the consecution of the SDGs. Strengthening the ownership  of the goals among local and regional governments, ensuring the participation of subnational authorities in forums on sustainable development, or promoting international cooperation.

Beyond their commitments, Local and Regional Governments called on national governments and the international community to enhance the spaces of dialogue between spheres of government and promote the implementation of the New Urban Agenda as an accelerator of the Global Goals.