The Annual Meeting of the Global and Taskforce of Local and Regional Governments took place in Barcelona in February. During it, members and partners of the GTF discussed their contribution to the achievement of the global agendas, as well as the challenges and opportunities that 2019 holds for the constituency.

The three main axes of action for the Global Taskforce throughout addressed: namely, Sustainable Development Goal (SDG) 11 and the New Urban Agenda; the 2030 Development Agenda; and the Climate Agenda, as well as the steps to take regarding the representation of the constituency before the G20.

For the first time, the Assembly of European Regions (AER) and the Global Parliament of Mayors (GPM) participated in the meeting as full members, and the Global Taskforce further acknowledged the Global Covenant of Mayors for Climate and Energy (GCoM) and Climate Chance as partners of the constituency.

The role of the constituency before the 2030 Development Agenda 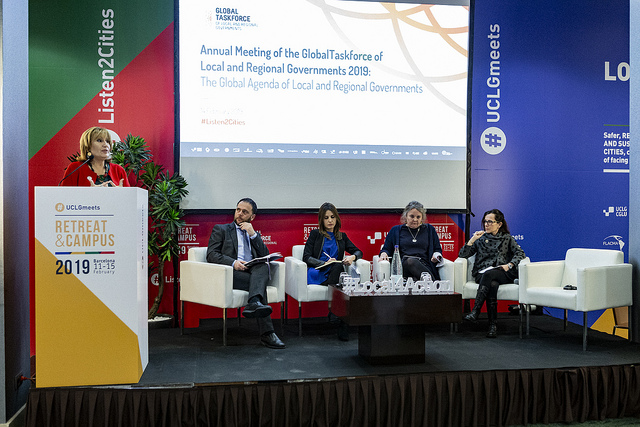 Emilia Sáiz, Secretary General of UCLG, facilitated the first part of the session. Throughout it, and with the High Level Political Forum and SDG Summit as the key milestones of the year, participants focused on the steps to take in the localization of the 2030 Agenda. Local and regional visibility, the requests that need to be made to national governments, and the partnerships between the Global Taskforce and other organizations were seen as the key issues to ensure that the concept of localization becomes engrained in the international system.

“The GTF has been very active since the beginning on the SDGs, Agenda 2030 and SDG11 in particular. Part of the advocacy was to claim that all SDGs were about local government.” Emilia Sáiz, Secretary General of UCLG”

Gabriel Barrios, representative of the ministry of Foreign Affairs of Spain, was invited to the session, and shared the efforts of the Spanish Governments on ensuring the 2030 Agenda becomes ingrained in the heart of the state’s actions. He further welcomed participants of the session to join the High Level Event in Seville taking place in March, which is co-organized with the Global Taskforce, and which is considered the most important political milestone prior to the HLPF by the office of the UN Secretary General.

Lucy Slack, Deputy Secretary General of CLGF, highlighted the work being done by the constituency in raising awareness of the concept of localization. She argued that a greater focus in international sessions on the importance of localization was a way to start dialogue, as well, on decentralization.

Marina Ponti, Global Director, United Nations SDG Action Campaign, gave a brief exposition on the UN SDG Action Campaign, highlighting that the goal was to mobilize, inspire and connect the networks around SDG action, and signaling both July and September as key moments for visibility.

Participants of the session argued that a high-level political delegation for the Local and Regional Government’s Forum at the occasion of UN Sustainable Summit would be indispensable, as well as strategically effective, but that nevertheless the delegation for the July ECOSOC HLPF would also need to be considered.

The shorter Local and Regional Governments’ Forum was a source of contention, since it would represent a small step backwards in the representation of the constituency before the UN. Natalia Vera, Secretary General, nrg4SD, expressed concern with the perspective of the Local and Regional Governments’ Forum becoming a “session”, rather than a full day, and argued to keep it in July, within the framework of the ECOSOC HLPF. 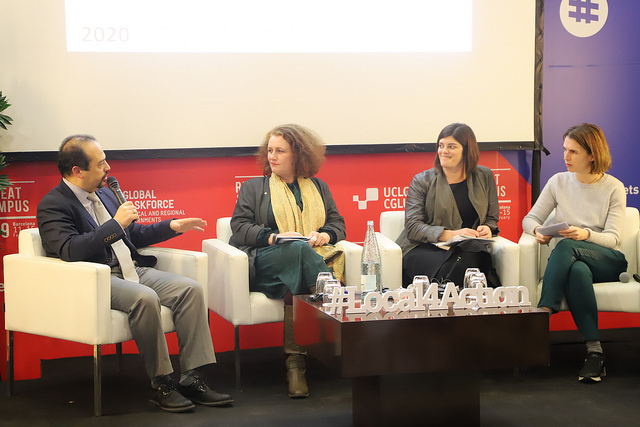 Throughout the second part of the session, facilitated by Yunus Arikan, Head of Policy and Advocacy of ICLEI, members of the Global Taskforce reviewed their presence at the key climate events of the year, as well as the strategy on climate of the constituency. An enhanced presence at the United Nations’ Environmental Assembly (UNEA), participants argued, would allow for demonstrating the potential of cities and regions in climate issues and further dialogue with national governments and seek stronger support in local action.

“We would like to connect discussions on Climate and SDGs… after all, the climate agenda is essential to achieve the global goals.” Yunus Arikan, Head of Policy and Advocacy of ICLEI

Members of the Global Taskforce agreed in particular on the importance of celebrating that the Cities Summit as part of the official programme of UNEA-4, and further addressed the possibility of further political inputs to the assembly.

Natalia Vera, Secretary General of nrg4SD, argued that UNEA guarantees a “fresh” approach on the advocacy work, with a relatively unexplored forum in which the constituency can have a more direct impact. She further reiterated the willingness of nrg4SD to represent the GTF, and stated that both nrg4SD and ICLEI could interpret the resolutions that UNEA produces for the regional and local level.

Amanda Eichel, Executive Director of the Global Covenant of Mayors for Climate and Energy, gave her first intervention as partner of the Global Taskforce. She and highlighted the UN Secretary General Summit on Climate as one of the key events of the year. She further elaborated on the need to develop a report to trigger the opportunity on solving climate, and to mobilize direct contributions of cities.

The New Urban Agenda as an accelerator of the SDGs

The part of the meeting that focused on the New Urban Agenda and SDG 11 began with an introduction on the new strategy of UN-Habitat by Diana López, Head of Local Government & Decentralization Unit, UN-Habitat. She further elaborated on the work done by the agency on localization, together with the country of Norway, and proposed to reframe a group of friend member states on SDG 11, which would support the localization strategy.

The key event in regards to the New Urban Agenda will be the tenth edition of the World Urban Forum, which will take place in Abu Dhabi from 7-13th of February 2020, with a “Listen to Cities” programme, which will be developed by the Global Taskforce. Further, a High-Level Dialogue between mayors and ministers is being considered in the framework of the WUF.

Participants of the session reminded of the need to implement the New Urban Agenda as a key accelerator to all global agendas, and to ensure a shift from the current model of governance to one in which all stakeholders were acknowledged as such. 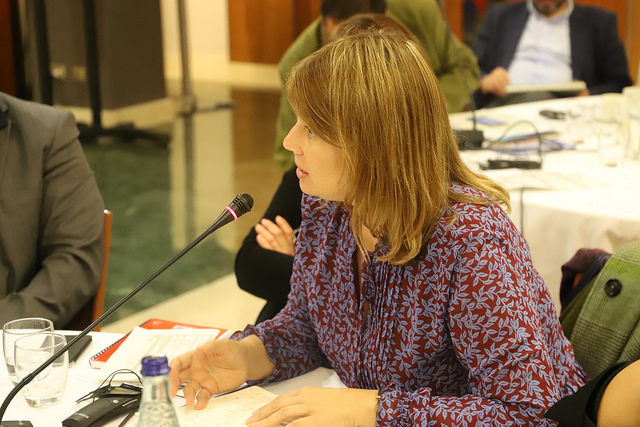 Urban 20: Enhancing the presence of the constituency before the G20

Local and regional governments addressed how to enhance the presence of urban and local governments’ topics in the G20 agenda. Emmanuelle Pinault, Head of City Diplomacy and Political Engagement of C40, introduced the highlights of the U20 agenda of the previous year, which included the first gathering in Buenos Aires. The impact, she stated, had been positive, creating a space for cities that previously did not exist, and producing an international agreement of mayors, which was handed to the president of a member state of the G20.

Members of the session agreed on the strategic objectives for the 2019 edition of U20, which would be to consolidate as the mechanism of local and regional governments to lobby the G20, and to stand up for climate. A Sherpa meeting taking place in March will be the following milestone of the U20 agenda for the year, prior to the U20 Mayors Summit in Tokyo in May.

Financing to achieve the Climate Goals

Financing for the climate agenda also played a part towards the end of the climate discussions in the meeting. Jean-François Habeau, Executive Director of FMDV, provided updates on the state of the Climate Change Fund, and argued that its restructuring represented a strong message from donors and international cooperation actors. He further addressed the first meeting of the Community of Practice on Finance, which took place in November in Madrid within the framework of the UCLG World Council gathering many cities sharing a common agenda on local financing. Finally, he also revealed that the FMDV is contributing, together with UCLG and UNCDF, to the International Municipal Investment Fund.

“The route to Paris is through cities and local governments” David Jackson, Director of Local Development Finance, UNCDF.

What next? Joint actions for the Constituency

The Annual Meeting of the Global Taskforce agreed on joint action to be undertaking in the key milestones ahead. Regarding the 2030 Agenda and the High Level Political Forum, the constituency is following the discussions that are being held towards the HLPF, and secured a space to be represented at the Expert Group Meeting on SDG17. The GTF further agreed to explore the possibilities for co-organizing host a second Local and Regional Governments’ Forum in the framework of the SDG Summit, and to welcome Voluntary Local Reviews also this year.

Regarding the Climate Agenda, the constituency agreed on the long-term goal to establish the Cities Summit as a key component of UNEA, since it is essential for localizing the SDGs and allowing for engagement with national governments. Further, members of the GTF are developing a regional governance track in the lead up to the UN Climate Summit through the International Conference on Climate Action.

The constituency further agreed to foster dialogues between UN Member States and Local and Regional Governments within the framework of the UN-Habitat Assembly and UCLG and C40, as co-conveners of the U20 Initiative, agreed to ensure a clear alignment between the topics addressed by U20 and those in the broader constituency’s agenda.