On 20 May, the meeting of UNACLA was held in the framework of the UCLG Executive Bureau; a historic session for the mechanism.

The session was chaired by Co-Chair of UNACLA and Mayor of Kazan, Ilsur Metshin, and counted with representation from the networks of the Global Taskforce of Local and Regional Governments such as ICLEI and CLGF, as well as the Executive Director of UN-Habitat, Maimunah Mohd. Sharif. 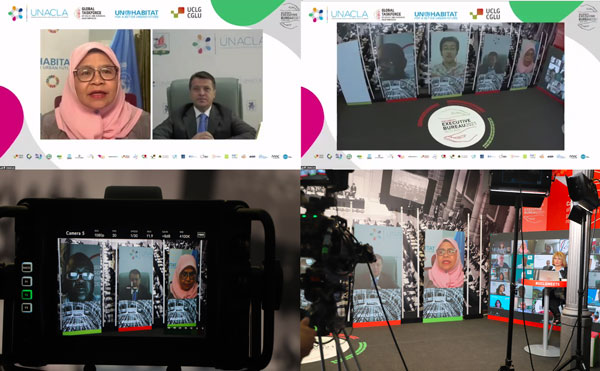 “We need to ensure UNACLA can play a strong role and representative advice on all issues related to local governments, ensuring a bridge between the local and regional government constituency and the UN System.” Ilsur Metshin, Mayor of Kazan, Co-Chair of UNACLA.

Maimunah Mohd. Sharif, Executive Director of UN-Habitat, and Co-chair of UNACLA presented the UN Task Force on the Future of Cities and its work consulting the Global Taskforce to ensure they feed into the upcoming report of the UN Secretary General on “Our Common Agenda: Responding to Current and Future Challenges”. She also reiterated the importance of Voluntary Local Reviews, which are one of the key thematic focuses of the Task Force on the Future of Cities, as well as local involvement in the New Urban Agenda reporting as we gear towards High-level Meeting on the implementation of the New Urban Agenda (2022), and the need for discussions to ensure that UNACLA can add value to UN-Habitat and the UN system.

“Let us take today to reflect on the main opportunities we have ahead of us, to revitalize UNACLA in the context of increased cooperation between the UN and Local and Regional Governments Constituency. Let me reaffirm my own commitment to ensuring that local and regional governments are recognized - with the importance they deserve - at all levels of the multilateral system.” Maimunah Mohd. Sharif, UN Habitat Executive Director, Co-chair of UNACLA

“We need to improve our collaboration in these difficult times. The work of the UN Task Force on the Future of Cities is a wonderful opportunity to advance our joint advocacy” Atishi Marlena, Member of Legislative Assembly of National Capital Territory of Delhi, ICLEI Vice President and UNACLA Vice-Chair.

Subsequently, Mayor Metshin introduced the proposals made by the Global Taskforce of Local and Regional Governments to articulate with the United Nations, including the Taskforce on the Future of Cities. It was underlined that the GTF presented to the UN Task Force a series of options for an improved and structural representation of our constituency at the UN with their respective analysis and strategic paths based on the proposals articulated by the UCLG Presidency in discussions with the Secretary General. Within this context, the revitalization of UNACLA as an advisory mechanism for the system as a whole plays an important role in the proposals.

“Local and regional governments need to be recognised in the UN system, not as an NGO, but as a sphere of government in our own right, and we need to work to achieving observer status.” Carlos Martínez, Mayor of Soria, Spain, and Envoy of the UCLG Presidency on the NUA.

“We need to work on recognition of LRGs in the global agendas and stress the accelerator role of NUA on the SDGs. Associations of regions and municipalities play a key role as links between the local level and international system.” - Jan Van Zanen, Mayor of the Hague and UCLG Co-President.

In the next segment of the session, participants reflected on the policy priorities of the committee moving forward underlining that multilateralism is key to facing the crises we are facing today and that moving forward with the New Urban Agenda will be essential in the achievement of the SDGs. 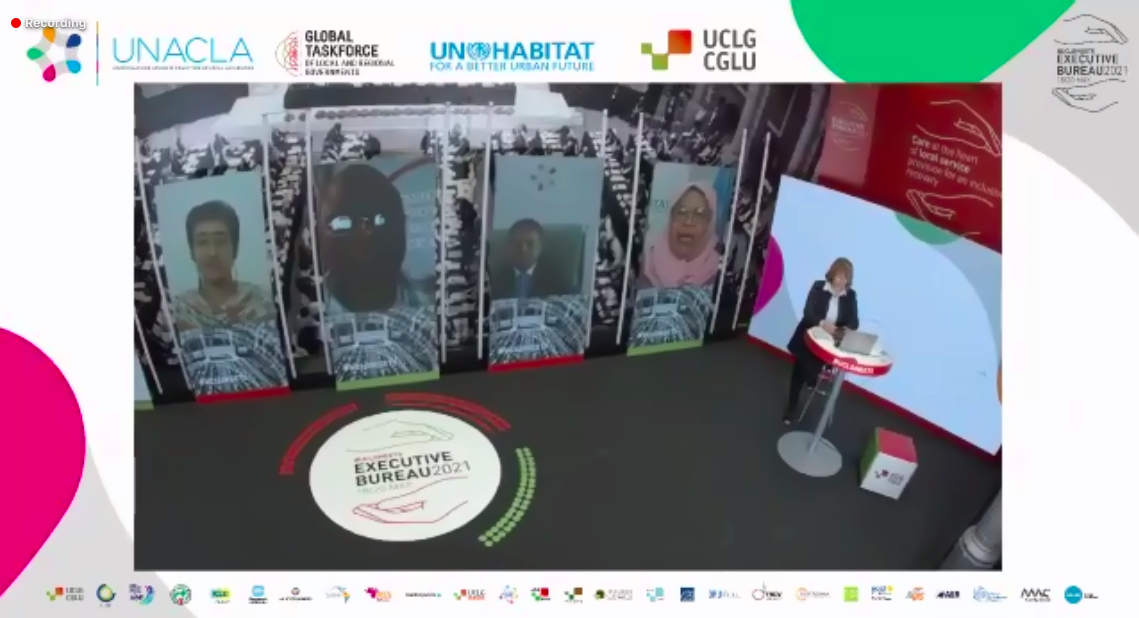 One of the top policy priorities that stemmed from the discussion was the issue of territorialization. Participants underlined that by territorializing the new urban agenda, the other global agendas will be accelerated and that is local and regional governments who can reach the goals and start moving indicators. Social equity also came out as a strong priority for UNACLA, who identified that the equality of our territories is a way to bring about equality among our communities. Other priorities mentioned by participants include an inclusive economic recovery from COVID-19 as well as planetary resilience and sustainability. The World Urban Forum was also mentioned by participants as an important moment to follow up on the constituency’s involvement in the review and implementation of the New Urban Agenda.

Participants also noted that the constituency gathered within the Global Taskforce of Local and Regional Governments (GTF) will present a global report on the New Urban Agenda, building on regional data and other cross-cutting thematics. It should serve as a basis to monitor the effective implementation of this Agenda and the SDGs.

“Quito+5 will be a critical milestone. We are ready to follow up this monitoring process very closely, to ensure the voices of our constituency and voice of our people are reflected in this process” Rev Mpho Moruakgomo, President of CLGF, UNACLA Vice-Chair

“Working with the WHO, on the implementation of the SDGs in the decade of action, and on moving forward with NUA: in all of these instances cities are at the forefront. It is imperative to ensure that national governments build on those ties but also help ensure the resources to tackle the challenges.” Berry Vrbanovic, Mayor of Kitchener and Co-treasurer of UCLG.

“Our constituency will be mobilised to promote the essential role of LRGs and their associations at the global level, for an effective implementation of the NUA” Carola Gunnarsson, Mayor of Sala (Sweden), Vice-President of the Swedish Association of Local Authorities and Regions (SALAR).

“All political action must be geared to ensure social equity, promote economic viability, and protect the environment. These three axes to develop social sustainability are the New Urban Agenda, and need to go hand in hand with territorialisation. This is the New Urban Agenda.” Mohamed Saadieh, President of UCLG-MEWA, President of Union of Dannieh Municipalities-Lebanon.

Participants concluded the segment on policy priorities by highlighting during the meeting that local and regional governments are the best allies to tackle the climate crisis, to build more resilient societies in the aftermath, and to develop healthy and sustainable economic growth. In this regard, they argued, strengthening of UNACLA is essential to strengthen the links between our constituency and the UN system to ensure transformation. The importance of the World Assembly of Local and Regional Governments as the mechanism to deepen the debate on the recognition of local and regional governments as formal actors in the review and follow-up of the New Urban Agenda was also highlighted, with participants calling on the need to ensure that UNACLA can have a greater influence on the resolutions to be adopted by UN-Habitat.

Ilsur Metshin, Chair of the meeting and Co-Chair of UNACLA and Mayor of Kazan, wrapped up the session by recalling the importance of UNACLA in ensuring structural collaboration continues between the local and regional governments constituency and the United Nations and concluded by reiterating the importance of developing a roadmap within UNACLA for the achievement of the New Urban Agenda. This roadmap will help ensure the constituency that the New Urban Agenda is a reality and that it acts as an accelerator of the SDGs’ implementation.