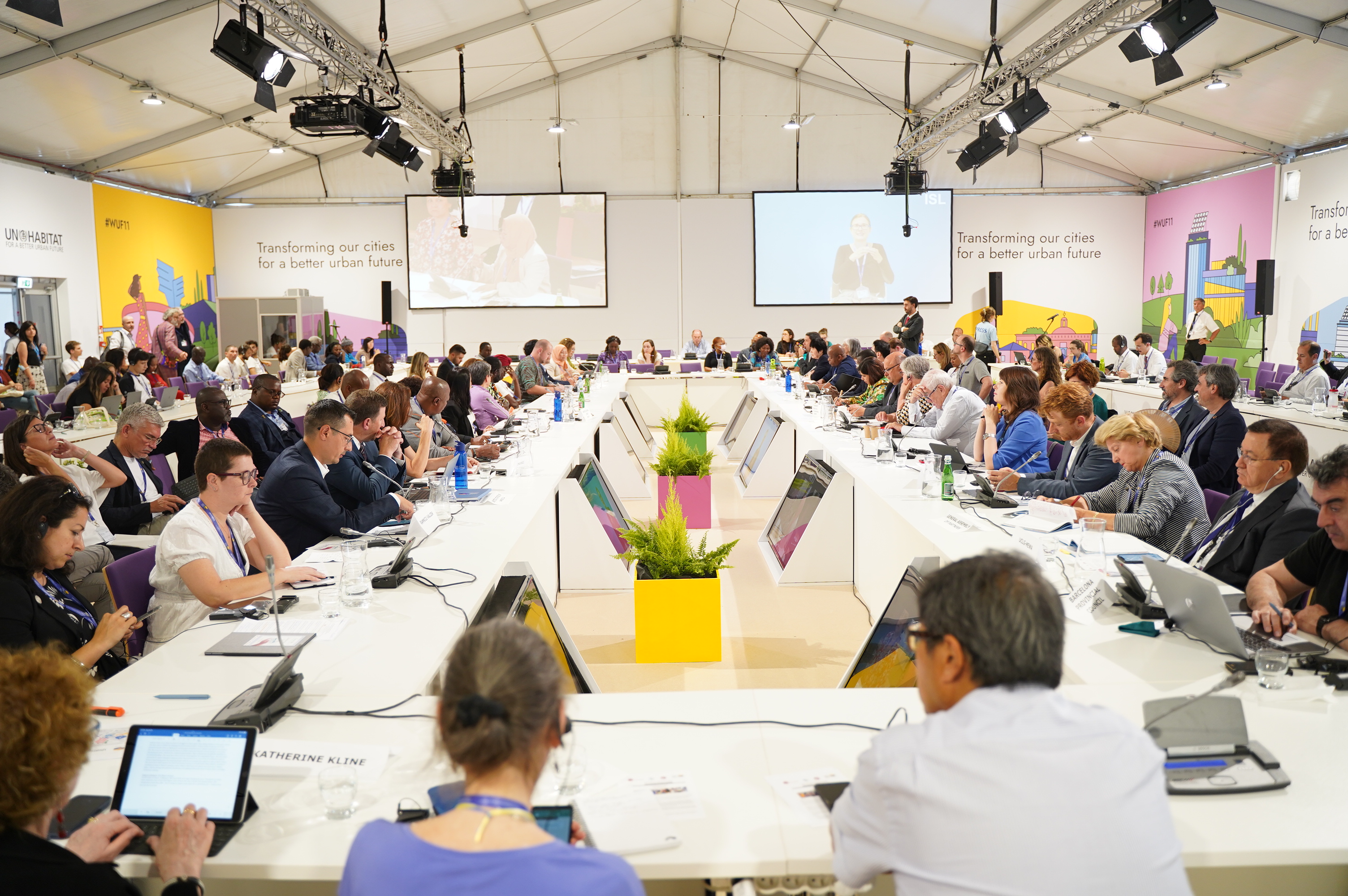 Inspired by the current context of linked and unprecedented crises, the gathering of the World Assembly at WUF11 addressed the role of local and regional governments in contributing to building peace as a means to strengthen multilateral responses to crises, and in being at the forefront to tackle emergencies. The World Assembly also allowed to take stock of the High-level Meeting on the review and follow up of the New Urban Agenda, convened by the H.E. the President of the United Nations General Assembly the 28th April in New York. 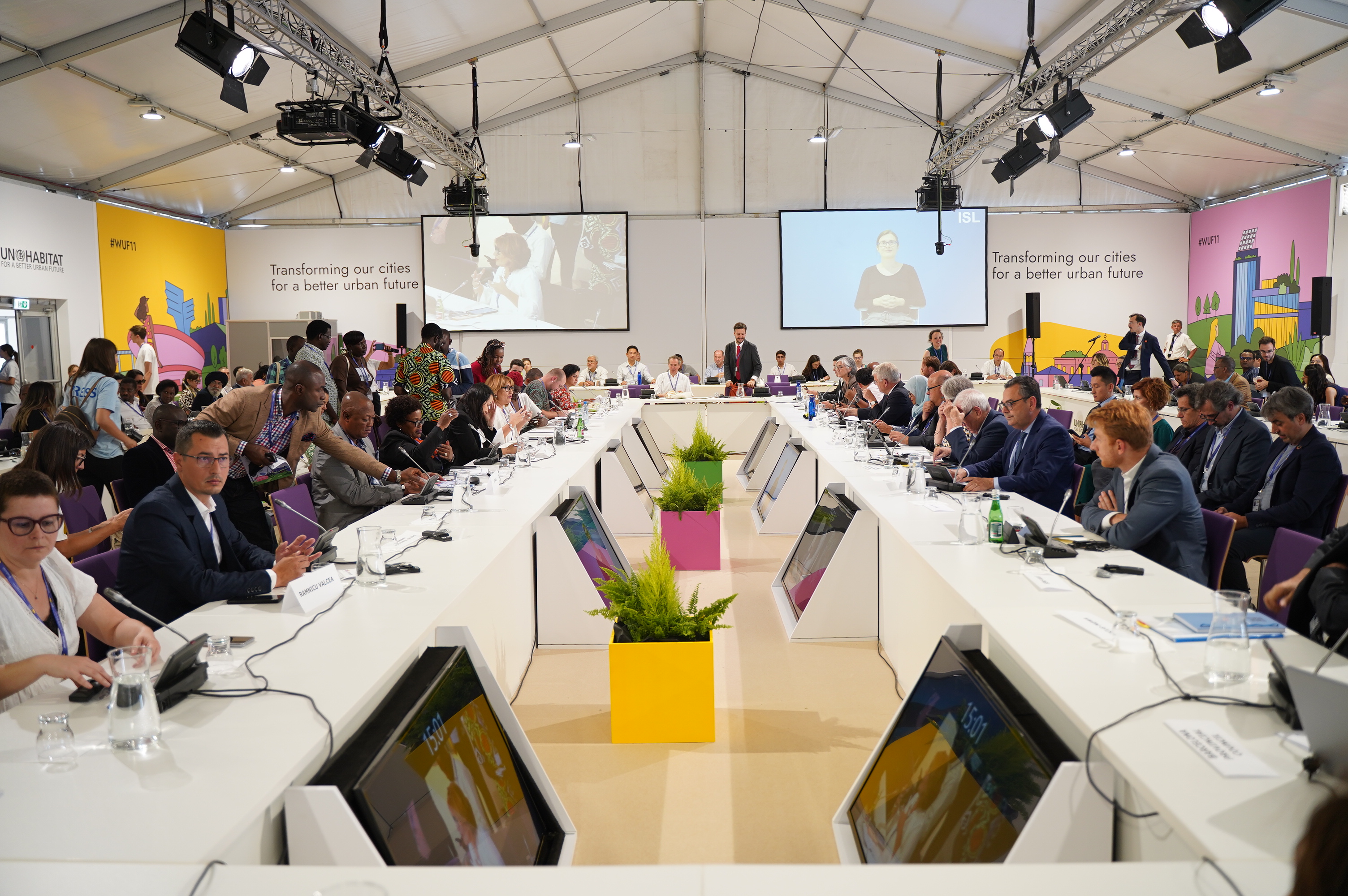 UN-Habitat Executive Director Maimunah Mohd Sharif recalled that the current moment of multidimensional crises, with a continuation and expansion of conflicts, is widening inequalities at the global level and commended the role of local and regional governments as peace builders and local players to secure the sustainable global agendas ahead of the Summit of the Future in September 2023.

UCLG Governing President and Mayor of Kitchener Berry Vrbanovic stressed the importance of having local and regional governments seen as partners to achieve the global agendas, co-create our future and truly transform multilateral governance systems.

UCLG Co-president Jan Van Zanen, Mator of The Hague, called on not forgetting togetherness as local to local can build bridges and reinforce their actions as first responders in delivering basic services with care, with the implementation of the NUA as an accelerator of our shared goals to ensure that no one is left behind.

Claudia Lopez, Mayor of Bogotá, urged to deepen decentralization efforts, including by transferring financial resources and technical capacities to deliver social services of care, while valorising, raising awareness about and redistributing care services, which recurrently fall overwhelmingly on women’s shoulders. 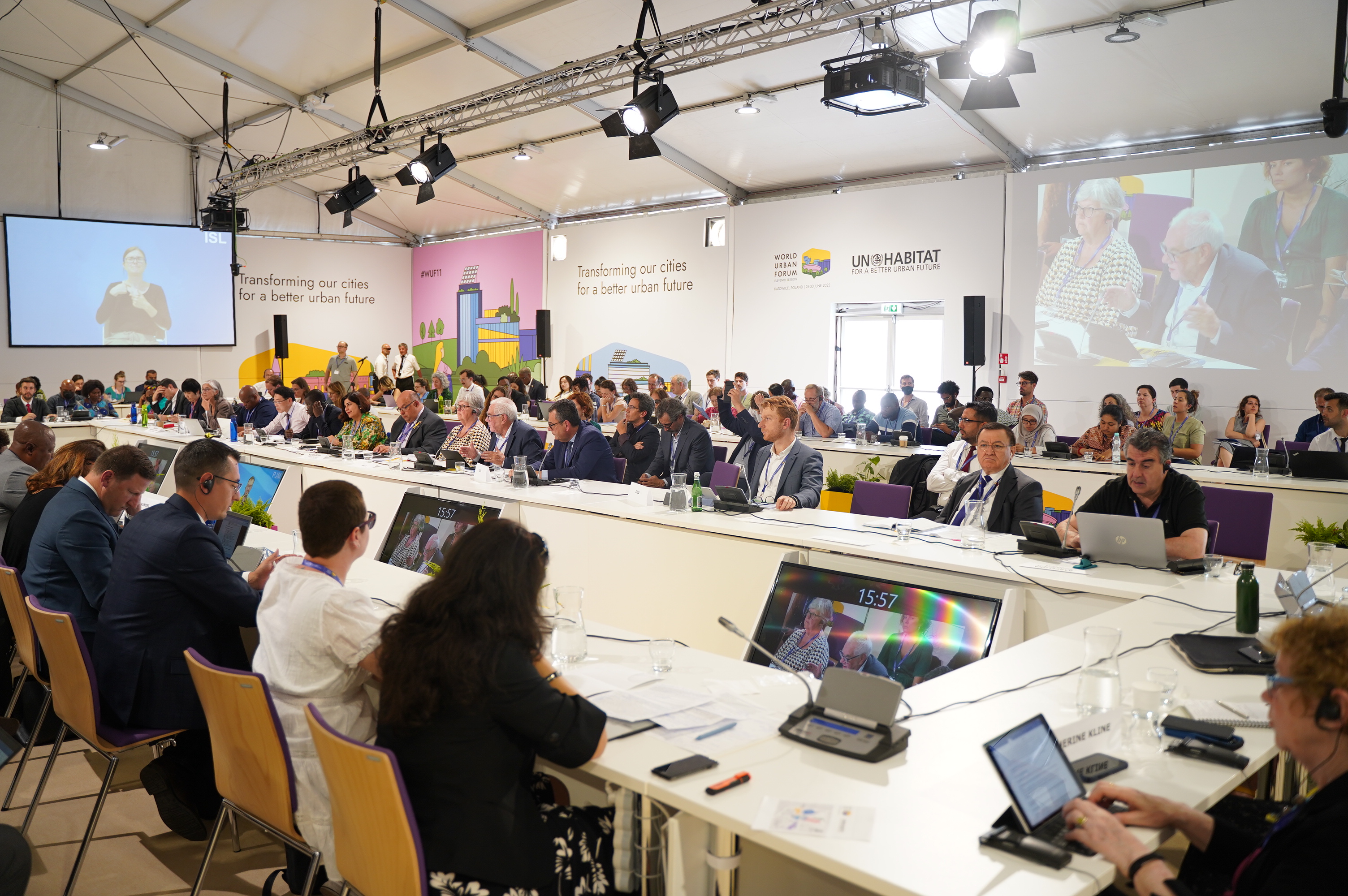 The opening session was followed by a discussion around the revision of the New Urban Agenda Under Review, facilitated by UCLG Secretary General Emilia Saiz. Ernest Maragall, Vice-president of International Relations and Cooperation of Barcelona Metropolitan Area, stressed that local and regional governments are creators of democracy and deliverers of rights and public services, and called on UN Habitat to be an ally of the constituency to have a leading role in addressing challenges at the international level, notably related to energy and migration.

Daria Cibrario, from Public Services International, highlighted the value of the New Urban Agenda to move away from unsustainable practices and pointed at the need to provide adequate funding to local and regional governments to promote decent work, specially for those workers who lack tools or training. Adriana Allen, President of Habitat International Coalition, called on building key alliances to achieve timely and structural change to address inequality by placing care at the core of political action, listening to the learnings of local and regional governments in the aftermath of the pandemic.

Alexandre Apsan Frediani, from the International Institute of Environment and Development, shared the main findings of the VI research report of the Global Observatory on Local Democracy and Decentralization (GOLD) on Pathways Towards Equality; notably, he highlighted an emerging consensus around local and regional governments’ central position to redirect current patterns of inequality by promoting a rights-based approach, localizing rights, and enhancing adequate economic models and enabling fiscal architecture.

Professor Peter Anyang' Nyong'o, Governor of Kisumu, stressed the need to bring into consideration the importance of clean and healthy transport alternatives, away from private vehicles, when planning and promoting sustainable urban development.

Xolani Sotashe, Chairperson of the Human settlements Working Group of SALGA and Councilor of Johannesburg, called on deepening the review of the progress of the NUA to refine the lessons learned in order to achieve our targets by 2030 and recalled that, in South Africa, the national association had developed their own NUA progress report and the cabinet adopted a new blueprint for all tiers of government to do collective urban planning. Mohamed Mezghani, UITP Secretary-General, brought in the socioeconomic dimension of public transport and its contribution in achieving the common goals emanating from the NUA, including the value of public transport in terms of job creation, environmental impact and health indicators compared to private transport.

Carlos Maya, Mayor of Pereira, recalled the importance of tackling inflation in the post pandemic societies to ensure that local and regional governments meet the needs of their communities so no one is left behind.

Hyungjong John, Ambassador of Daejeon Metropolitan City, wrapped up the session introducing the upcoming UCLG World Congress of UCLG, to be held in Daejeon on 10-14 October, and reminding the key role given by the UN Secretary General’s Our Common Agenda to local and regional governments to achieve the global agendas and the need to bring forward the implementation of the NUA as a catalyst of such transformation.

The second session of the World Assembly was dedicated to local and regional governments’ approaches to peace building and responses to crises. The discussion was facilitated by Paul Currie, Assistant Director of ICLEI Africa.

UCLG Vice President for Europe and Mayor of Sala Carola Gunnarsson, stressing the proximity from Katowice to the Ukrainian border, called on local and regional governments to learn from crises to work together for a sustainable future and peace, notably by involving local communities and leading the renewal of the multilateral system towards one where local and regional governments hold permanent seat at decision making tables.

Evgenia Lodvigova, Vice Mayor of Kazan, stressed the importance of keeping city to city dialogue alive, even in situations of crisis, and to be present in discussions at the global level. She highlighted the importance of multistakeholder conversations throughout the pademic in order to maintain basic services and providing care to the population.

Khadija Ahmadi, former Mayor of Nili, drew the inextricable link between peace and the respect for human rights and recalled the crucial role of local governments and local communities in crisis response. Noraini Roslan, Mayor of Klang, recalled the growing impact of natural disasters and the importance to build partnerships with other cities to share knowledge and pool resources while promoting alternative economic models that build resilience and foster togetherness and heritage preservation.

Kevin Nelson, Urban Governance Lead from USAID, stressed the importance of decentralizing foreign assistance for development to make it more effective, promote accountability and long range time perspectives, and ensure meaningful investments that build local capacities. Naoko Yamamoto, WHO Assistant Director General for Healthier Populations, noted that the pandemic was a wake up call about the importance of urban policy for global health and called on promoting more resilient primary health care and disaster response-related systems that include  human, environmental and equity dimensions.

Manuel de Araujo, Mayor of Quelimane, recalled the interconnectedness of the SDGs and the potential of local and regional governments in ensuring we can meet the global goals. Localization, he recalled, is the way forward to ensure that the agendas we set for ourselves are a reality on the ground.

Mercè Conesa, Director of INCASOL, shared the experience of affordable housing programming to promote recycling of old buildings and connect rural areas digitally within the framework of the European Green Deal.

Jonas Sèdozan Gbenameto, Mayor of Sèmè-Podji, recalled that national development is not possible without local development and called for enabling investments from the State level so transformative projects can contribute to societal change. Andrei Gheorghiu, Vice Mayor of Ramnicu Valcea, highlighted the importance of city to city cooperation to pool resources to bring about more sustainable ways of living, in the case of his city through renewable transport.

Shipra Narang Suri, Chief of Urban Practices Branch at UN-Habitat, and Christopher Williams, Director of the UN-Habitat New York Office, wrapped up the session. Shipra Narang Suri noted that the implementation of the New Urban Agenda needs further progress to address exclusionary challenges by working harder on the rights agenda and strengthening local governance. Christopher Williams commended organizational efforts by local and regional governments to gather under one common umbrella, with influence in a number of unprecedented high-level political activities over the last years that have translated into renewed committmenrsmand defined actions for the way forward , and identified  the Summit of the Future as a central opportunity for local and regional governments to represent the voice of communities.