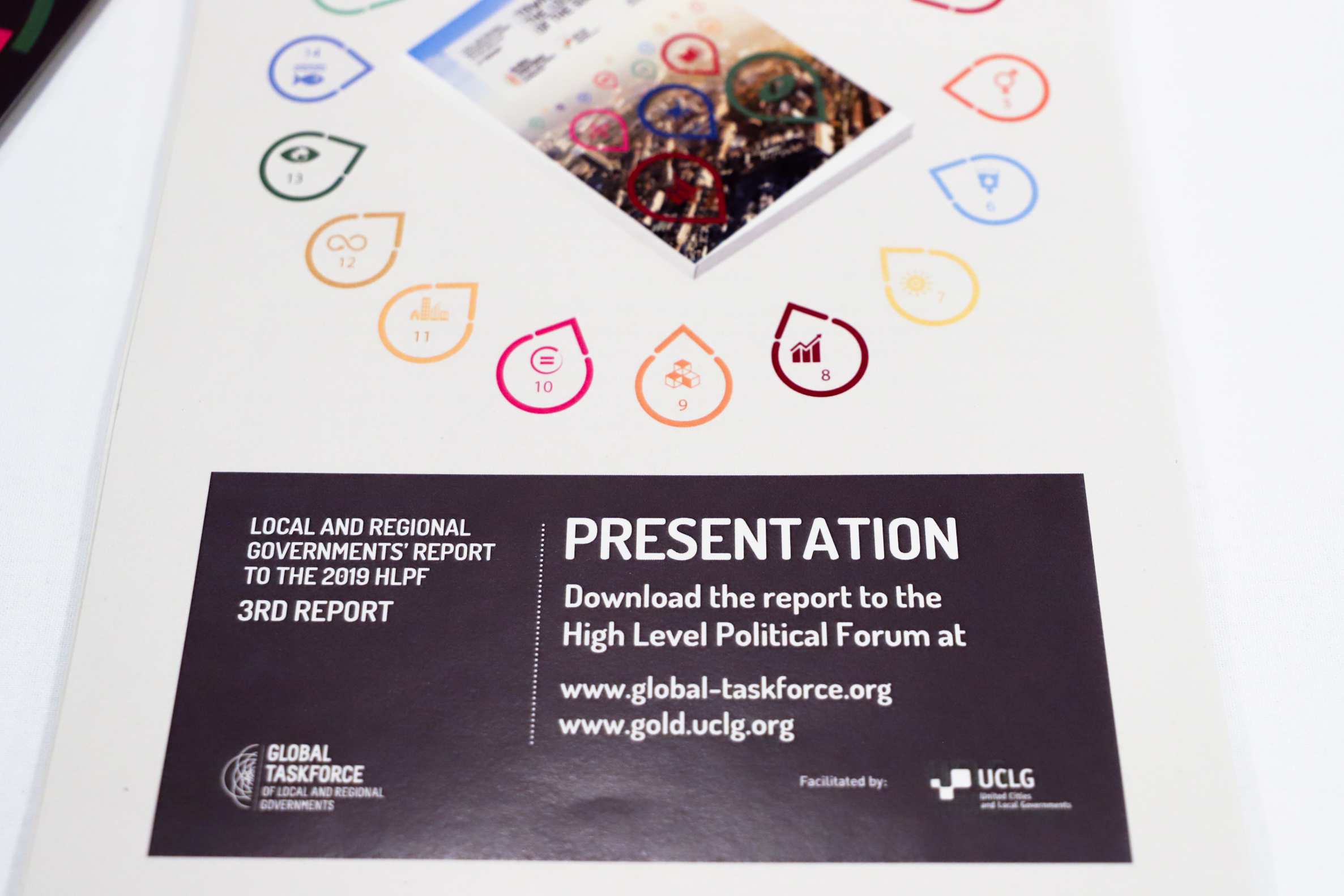 UCLG and the Global Taskforce presented on July 15 the third edition of the Towards the Localization of the SDGs report to the High-Level Political Forum (HLPF). The report builds on over 180 survey replies from 80 countries and the analysis of more than 140 VNRs since 2016. It shows steady improvement in the involvement of local and regional governments, while also underlining the need for more coordination and mobilization to leave no one and no place behind.

The third edition of Towards the Localization of the SDGs, the report of the Local and Regional Governments’ constituency to the HLPF, was launched on July 15, 2019, on the stage of the 2nd Forum of Local and Regional Governments, organized by UCLG and the Global Taskforce (GTF). The report built on the responses to the global UCLG survey on localization (180 replies in total, from 80 countries, with 101 responses coming directly from local governments or their national associations), the analysis of the 47 Voluntary National Reviews presented at the 2019 HLPF, and the contributions of international experts, partners and members of the UCLG networks on the five SDGs assessed this year: SDGs 4, 8, 10, 13 and 16.

The report also coincides with the end of the United Nations’ first assessment cycle of SDG implementation, allowing our constituency to draw the first conclusions on progress, achievements and challenges of the 2016-2019 period. The third editions of Towards the Localization of the SDGs shows steady, clear progress in localization and the involvement of local governments all around the world. This trend, however, does not have yet the momentum or speed to meet the 2030 goals.

The level of involvement and engagement of local governments in the production of the national reviews is still limited. Notably, there are no major differences in these figures from 2016 to 2019: still only local governments in about 40%-45% of the surveyed countries affirms having being involved properly in the reporting and monitoring processes of their countries.

The set of initiatives and policy actions undertaken at the local level has grown to inspiring numbers. More than 9,000 cities from about 130 countries have already committed to measurable action on climate change (SDG 13). Local governments are still key for the provision of accessible, high-quality education (SDG 4): on average, local governments spend 23.6% of their budgets on education. Local governments around the world are taking action to increase green and circular economy opportunities, the integration of new technologies, and the formalization of informal and unsafe work conditions (SDG 8). Many pioneering cities have been at the forefront in the struggle for civil liberties and rights and the protection of minorities and vulnerable groups threatened by climate change, discrimination, forced migration and poverty (SDG 10). Their engagement has been seminal for the creation and diffusion of clearer, more transparent and accountable institutions at the local level and from the bottom up (SDG 16). All this notwithstanding, the report highlights that a significant scaling-up of these initiatives will be needed to trigger a snowball effect and make local governments true catalysts of change towards the realization of the 2030 Agenda.

The report and its presentation in New York provided a unique opportunity for experts, elected officials, UN agencies, international organizations and our network members to meet and discuss the agenda for the urgent times ahead, when bold decisions to empower the local level will be needed, especially in terms of financial support, to make the agendas a game-changing reality. The report shows an increasing commitment and participation of local governments and stakeholders. It is an important potential and a source of privileged information, as shown by the constant emergence of many Voluntary Local Reviews, with which many local governments are taking part to this global conversation and proposing their own strategy and vision to leave no one and no place behind.