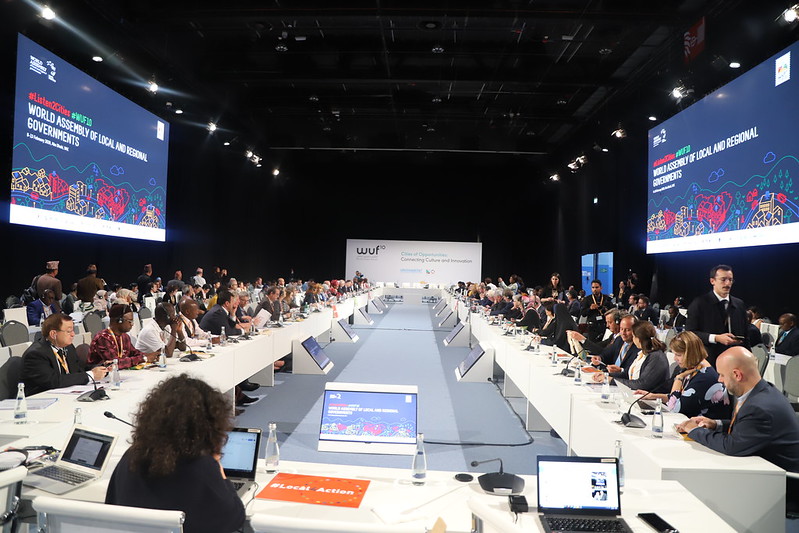 “Local governments are key leaders of change and innovation. They also bring together all sectors in their communities and raise awareness on the global goals to ensure a sustainable future for all communities” Maimunah Mohd Sharif, Executive Director of UN-Habitat.

“We are essential partners in the transformation of our planet and GTF is an important mechanism to achieve the NUA, viewing it as an implementation programme to achieve SDG.”,  Mpho MW Moruakgomo, President of CLGF

Over 500 participants gathered at the World Assembly of Local and Regional Governments, convened by the Global Taskforce, on Saturday, 8th February in Abu Dhabi. Structured around three moments, 50 speakers, ranging from local and regional governments, national governments, and other stakeholders, exchanged perspectives, provided practices and examples, and laid out recommendations to the World Urban Forum in the dialogues that took place.

Representatives from all of the networks of the Global Taskforce facilitated a World Assembly that spoke directly to the dialogues that took place within the Abu Dhabi, bringing forward the role that local and regional governments can play in developing a sustainable development model strongly anchored in culture and human rights, upholding public service provision to ensure adequate living standards for all.

With strong participation from national governments as well as the cultural sector and other constituencies (academia, the civil society) the Assembly showcased the commitment of our constituency to open spaces for transformation for all stakeholders building on the outcomes of the World Assembly that took place only 3 months before, in Durban.

Throughout the first Roundtable participants showcased their commitments to securing strong partnerships, and calling for multilevel and collaborative action to achieve sustainable urbanization, raise the global climate ambition, and respond to the challenges of the decade as one humanity.

Participants from local and regional governments argued that local service provision are integral to foster culture (through concrete examples such as libraries, and cultural facilities) as well as to achieve the global goals. Partnerships among all spheres of government, the civil society and other organizations is the way forward, and national governments, the international system and other stakeholders need to be a part of local service provision, developing enabling and sustainable financing mechanisms. Local and regional governments called to keep the spirit of multilateralism alive, to carry out multilateral and multistakeholder efforts to ensure the future that we dream of, to transform the model of governance and to put people at the forefront of local planning.

How urbanization affects and is affected by culture and innovation

Cities that take care of their people was the key sentiment across the second session, which boasted an all-women panel in which participants shared experiences on how they were implementing a rights-based approach to the cities. The role of culture and identity in peacebuilding was explored, in particular, by participants from the global south, who identified the necessity of planning cities for everyone.

Gender mainstreaming was identified as an essential component for equal access to the city by everyone. Men and women interact differently with cities, and these inequalities show themselves at different levels. The role of local and regional governments in taking action and ensuring gender responsive public policies will allow to anchor protective spaces for all of the people in cities.

How local and regional governments are integral to preserve urban heritage

Mayors that took part in the session argued for local and regional governments to lead the conversation on the preservation of natural and cultural heritage and for those two dimensions to be considered as essential for the global goals. Participants further argued for the inclusion of heritage in urban planning, in particular in areas where it is most threatened, and to evaluate the impact of our actions on our urban heritage to ensure respect for cultural diversity.

Representatives from national governments pointed out that dialogue between spheres of government is integral to preserve cultural heritage. Mapping cultural rights and a solid communication among all stakeholders, in particular with the civil society and cultural groups, will allow for creativity and development to flourish in cities.

Local and regional governments play a key role in maximizing the relationship between culture and sustainable urbanization. Culture and sustainable urbanization are inextricably linked. This statement resonated with speakers, who argued that cultural rights, linked to basic services, are essential for sustainable development.  Participants from our constituency, in particular those from countries and regions in fragile contexts called on the international system to work in unison with our constituency to ensure fragility does not transform into violence, damaging our cultural heritage.

Throughout, participants reiterated the importance of learning from one’s cultural identity and applying the lessons learnt to truly integrate culture as a strand of global solidarity, asking questions about what heritage entails for the younger generations and how to foster ownership on cultural heritage and identity in a globalized. Cultural diversity was hailed as an essential lever to link local and global heritages, peace, and the achievement of the global agendas. One of the other key themes of the World Urban Forum was innovation. Participants argued for embracing technology as a tool that will allow local governance to thrive and allow a more direct relationship with our citizens, and to train communities to make best use of them.

Representatives from the cultural sector argued that innovation is not born in a vacuum, and that our own heritages, cultures, and identities are in and of themselves essential for innovation. History needs to be considered, and our lessons learnt brought forward, to ensure that innovation comes from the ground-up and is linked to the identities of the people. This sentiment was echoed by mayors who presented case examples from cities that had harnessed their industrial heritage to become innovative cities that look towards the future.

Embracing technology, however, does not mean being shaped by it. Participants gathered at the world assembly there were also voices that argued for understanding innovation as a concept that goes beyond technology, and called for bridging the gap between territories that are more adapted to new technologies and to make use of technologies in ways that would harness the potential of communities, instead of allowing technology to lead the future of humanity as a separate entity.

Innovation and Culture for the Achievement of the Global Goals. 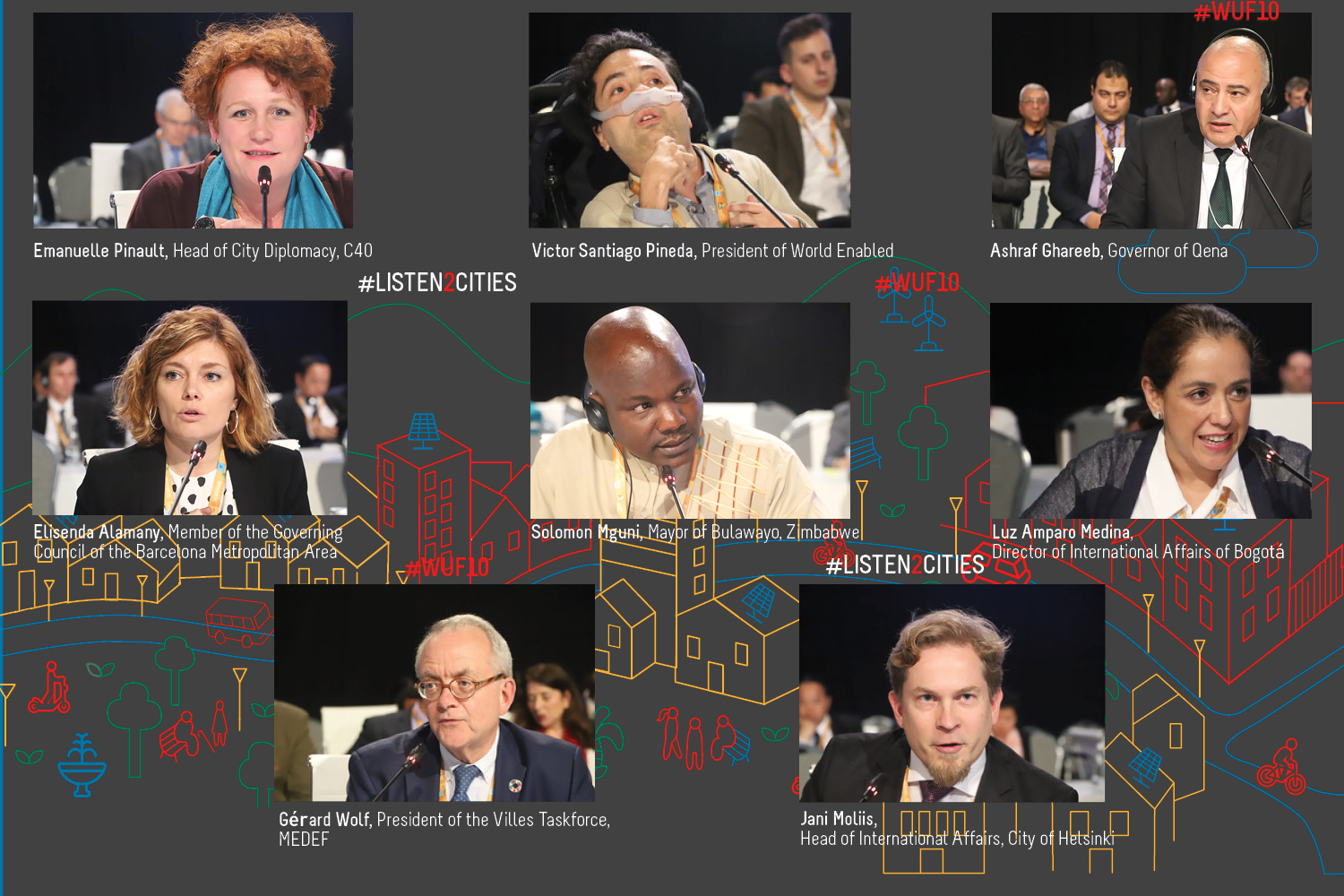 The final conversation of the World Assembly was a call to action for the localization of the global agendas, for true local ownership, as the best way in which the innovation and the cultural acquis of local and regional governments would be harnessed for the future of humanity.

Participants referred, once again, to basic service provision as integral for the achievement of the global goals, and argued that community involvement is essential for local ownership of the agendas. Women empowerment, citizen engagement in public affairs, and participatory planning were seen as key areas for creating livable cities, accessible to all.