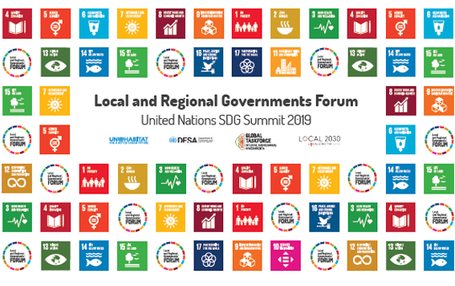 The 2nd Local and Regional Governments' Forum took place on Tuesday, 24 September at the UN within the framework of United National General Assembly high-level week. Organized by the Global Taskforce with UNDESA and UN-Habitat, and co-sponsored by the Governments of Cameroon and Morocco, the Forum stressed the need for transformative action for the people and the planet. Local and regional leaders’ reaffirmed city’s and region’s commitment to act as drivers of the acceleration needed to achieve the global goals. The Forum saw the adoption of the constituency’s Statement to the SDG Summit.

The Forum was a space for acknowledging that business-as-usual is not an option. Local and regional leaders reaffirmed the principles of the 2030 Agenda as the most relevant tool for transformation to work towards a renewed social contract that re-shapes how we relate to the planet and to each other. National, regional and local representatives, however, also acknowledged that no single sphere of government can do this alone: there is a need for multi-level, inter-governmental cooperation to provide communities with adequate public services to ensure decent living standards. A change in our governance model is also needed to co-create with them mitigation and adaptation strategies to face climate change and carry out the ecological transition towards net-zero carbon societies.

Localizing the 2030 Agenda and inclusion of all spheres of government.

Throughout the Forum, it was clear that the spirit and ambition of the Seville Commitment, which calls for building a local-global movement for the localization of global agendas, was present with inclusive, diverse and representative participation. During the opening, the local and regional governments’ delegation highlighted the discussions on the links between climate action and sustainable development. Maimunah Sharif, Executive Director of UN Habitat, reaffirmed at the opening of the forum "the need for dialogue between all spheres of government” and that, thanks to this Forum, “this necessary space for multi-level dialogue is created". Moreover, Deputy Minister of the Department of Cooperative Governance and Traditional Affairs of South Africa, Parks Tau, representing the constituency through the Global Taskforce, wanted to express that the “constituency understands like no other the links between the SDGs and climate action", and called on the different spheres of government to join efforts for a joint implementation of the global agendas to achieve full sustainable development in territories.

Adding on this, the Mayor of Barcelona, Ada Colau, expanded the scope of transformation needed – from relations between public institutions, to a true multi-stakeholder change in which the private sector also plays a transformative role towards a fair, inclusive ecological transition: “Who is really in charge here? I ask national governments to move from declaration to action, and to show that they are really in charge – not corporate powers”.

Triggering the transformation needed to address the climate challenge.

The Forum proved to be an important moment for local and regional government elected-officials to highlight the local nature of the global goals, as well as the interconnected nature of the climate and sustainable development agendas. To this end, the mayor of Kazan, Iltsur Metshin, and mayor of Strasbourg, Roland Ries, brought to light the fact that cities and local and regional governments need to act at the global stage. Mayor Metshin recalled that “awareness of the SDGs will be a base for more local action and will facilitate their systematization” while mayor Ries emphasized that “Strasbourg sees itself as part of a global community and that states need to give local and regional governments more opportunities & responsibilities in making the SDGs a reality.”

The importance of ownership and capacity building of the global agendas and specifically of the fight on climate change was reaffirmed by both the president of the region of Nouakchott, Fatimetou Mint Abdel Malick, who highlighted the need to realize “a full ecological transition that needs to be led, and owned by communities to be able to succeed” while the mayor of Seville, Juan Espadas, who highlighted that “local and regional governments must be empowered and respond with projects capable of including and connecting with society, and strengthening democracy for sustainable development”.

Local and regional government elected officials also shed light on the cross-cutting nature of the SDGs and their relationship to climate change, the natural world, and multi-level governance. To this end, the mayor of Freetown, Yvonne Aki-Sawyerr, mentioned the fact that “all SDGs are needed to transform our relationship with the planet, build resilience & take climate action” while the president of CONGOPE and Governor of Imbabura, Pablo Jurado, reminded that everyone was gathered there to “make the world understand that multi-level articulation is now more important than ever if we are to protect our natural heritage” and that everyone must “strengthen international networks and join forces with the UN System".

The forum was also a moment to highlight the vital importance that adequate and sufficient financing has in the achievement of the 2030 Agenda and in battling the climate emergency. Within this context, the mayor of Chefchaouen, Mohamed Sefiani, reaffirmed the fact that “local and regional governments have a responsibility & duty to raise awareness of the 2030 Agenda and localize the global goals but that without adequate financial resources, we will not be able to fully play our central role.” Along the same lines, the mayor of Belize City, Bernard Wagner reminded everyone that almost 1000 local and regional governments had declared a climate-related state of emergency and underlined that to take action, “member states will need to unlock financial resources and allow for the regulatory changes necessary for the ecological transition.”

Good practices for the implementation of the 2030 Agenda and acceleration commitments.

The second and third panels of the day focused on good practices, the acceleration commitments on the localization of the SDGs within the framework of the 2030 Agenda, and on establishing synergies for accelerating commitments.

Local and regional leaders had the opportunity to share initiatives that are taking place in their territories to make true sustainable development possible. The mayor of Mannheim, Peter Kurz, pointed out how “cities are examples of cooperation”, and provided the example of Mannheim cooperating with the city of Kilis in a development project aimed at giving decent work to refugees and empowering women. The Mayor of Surabaya, Tri Rismaharini, shared that "communities need to feel involved in the policies that will transform their lives," and used the example of her city as a place that involves its citizens in sustainable policies on the grounds that "Surabaya is the only place in the world where our citizens can pay for bus travel by presenting plastic bottles to the driver”.

Local and regional governments also shared their initiatives on gender equality and the role it can play in strengthening democracy. Macoura Dao, President of REFELA presented the commitment of the network to accelerate the SDGs by stating that “the localization of the SDG offers an opportunity to strengthen the role of women in politics and promote the election of women.”

The forum also illuminated the importance that Voluntary Local Reviews have within the implementation of the 2030 Agenda and in transforming our world. Yasutomo Suzuki, Mayor of Hamamatsu, argued that VLRs are “more than an information tool: they have the power to drive the bottom-up transformation needed to accelerate the localization of SDGs”. The Mayor of Helsinki, Jan Vapaavuori, shared how his city is leading in the process of Voluntary Local Reviews (VLRs) thanks to the implementation of a local participatory budget since, according to the mayor, "the knowledge and competence of citizens is the basis of the model of participation of cities".

The alignment between local action and the 2030 Agenda was also emphasized as essential for the global agendas as shown by the mayor of Kitchener, Berry Vrbanovic, who mentioned that "localizing the SDGs is not only translating the objectives into local policies, but doing so in the real social, political and economic contexts of the communities”. The president of the Aude region, Andre Viola, mentioned that “Aude is directing all its public policies based on the SDGs, thus contributing to their localization and reversing a path from the international level to the local level” while the governor of Oaxaca, Alejandro Murat, reaffirmed his commitments to continue to integrate the 2030 Agenda into all of the regions public policies.

Finally, the panel reaffirmed the importance local leadership and service delivery have in achieving the global agendas. In this regard, the prefect of Azuay, Yako Pérez, reaffirmed the idea that: "The UN must reflect the leadership of the regions in accelerating Agenda 2030” while the president of SALGA, Thembi Nkadimeng stressed that "the 2030 Agenda cannot be achieved by itself and that local governments are committed to accelerating all universal development agendas through adequate service delivery and policy development.”

Our constituency’s statement to the UNGA: trust cities and regions in entering the Implementation Decade

The Forum of Local and Regional Governments proved to be key in showcasing the commitments and strength of local and regional governments towards the global agendas. It also proved to be an essential space for dialogue between the different spheres of government and the United Nations system for the definition, implementation, and follow-up of the development agendas.

The statement of the GTF, adopted at the Forum, calls for recognition of the leadership of local and regional leaders in providing public services for the achievement of the SDGs. To this end, it also calls on national governments to ensure adequate financial framework and regulatory powers to cities and regions, as they are the ones undertaking climate action and shifting towards sustainable development on the ground.

The Statement also recognized the Voluntary Local Reviews as essential, and the compilation work of these voluntary reviews was highlighted in the third report "Towards the localization of SDGs" presented in July at the High-Level Political Forum (see here).

The commitments and efforts of local and regional governments are indispensable and integral to the transformation we need – and, as such, they will need to be considered in a re-shaped governance model while we transform our consumption and production models and effectively transition towards inclusive, net-zero carbon societies. We are the sphere of government closest to citizens and we are committed to leaving no one, no place, and no territory behind.